Image: Alan Krause ’76 stands in front of the construction site at the Panama Canal expansion. (Photo courtesy of MWH Global)

TACOMA, Wash. (April 10, 2015)—Fun fact: The Panama Canal opened 101 years ago. Another? The canal is about to expand to double its capacity. The most fun fact? A Lute is leading the way. 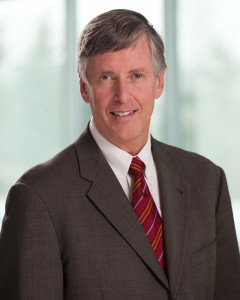 Alan Krause ’76 is chairman and chief executive officer of MWH Global, an engineering firm that, according to its website, “manage[s] water purity and availability in a sustainable fashion for the health, livelihood and security of people worldwide.”

One of its biggest projects is designing and providing construction management on the third set of locks for the Panama Canal Expansion project. This project is the subject of a new episode of the History Channel show Modern Marvels, called “Panama Canal Supersized,” which airs at 9 p.m. PDT on Saturday, April 11. (Check your local listings for variations.) (Watch the Modern Marvels trailer here.)

The canal project will be “one of the engineering wonders of the world,” just like the original canal, Krause said. “It’s the largest civil-engineering project in the world today and will double the shipping traffic over the current level when complete.”

Krause graduated from PLU in 1976 with a Bachelor of Science in Geology. He was one of the first students to graduate from the program, which he said was “exciting and very personalized.”

He also participated in the PLU rowing team, serving as captain for two years, which gave him a “competitive streak” that pushed him along.

His advice for Lutes today? Work hard, and recognize “there is no substitute for preparation, integrity and learning to motivate others to achieve goals beyond the reach of individuals.”