Image: Left, the shaft of a tomb is opened for investigation by the PLU archaeological expedition. Center, Ryan near Tomb 60. Right, the expedition works outside a tomb under a canopy. (Photos Courtesy Denis Whitfill, PLU Valley of the Kings Project)

TACOMA, WASH. (May 1, 2015)- Howard Carter may have discovered King Tut’s tomb in 1922, but the Valley of the Kings in Egypt has yet to be fully explored. In February, Pacific Lutheran University Faculty Fellow in the Humanities Donald Ryan, traveled to Egypt to resume excavation of the renowned archaeological site.

The trip marked Ryan’s first time back to the valley after the Egyptian Revolution of 2011 forced his team to evacuate due to the increasing instability of the area.

“The conflict came to us and we were caught in the middle of it,” said Ryan. “We decided to go back and give it another try in 2015 and we went back to successfully finish what we were trying to do in 2011.”

Ryan’s trip focused on conservation and documentation of several largely ignored but significant tombs that he has been excavating. He and his fellow Archaeologists helped install doors over the tombs, so that visitors could walk over them without damaging their entrances.

Additionally, the team labeled all of the tombs. “For each of the tombs that we worked on, we made bilingual signs in Arabic and English which provide the name of the tomb and its date, the fact that it is undecorated and a plan of the tomb,” said Ryan.

The Valley of the Kings is the final resting place of many famous Egyptian pharaohs, most notably King Tut. However, buried among the incredibly painted royal sepulchers that captivated the world, lay tombs that were deemed insignificant by early archaeologists and doomed to be lost within the Valley’s sand and limestone. That is, until Ryan and his team rediscovered some of these forgotten tombs and brought them to the forefront of the archaeological world.

Ryan decided to focus his attention on the “obscure, undecorated and ignored” tombs within the Valley of the Kings. He was able to locate a half dozen tombs originally discovered in the late 1800’s and early 1900’s that had thought to have been lost.

One of Ryan’s most notable finds is the re-discovery of Tomb 60, which was originally found by Egyptologist Howard Carter in 1903. Carter found the tomb in shambles, with most of its contents destroyed or taken.

Little attention was paid to the two mummies occupying the tomb. “He thought it was boring, so he covered it up,” said Ryan. Eventually, the tomb fell into obscurity and its location was forgotten.

“On the first day of our expedition, we took a broom and swept it along the dirt and found an outline of a pit in the bedrock,” recounted Ryan. “Sure enough, there it was. We discovered the ‘lost tomb’ with a broom in about the first 30 minutes of our expedition.”

The rediscovery of Tomb 60 proved to be one of the most important archaeological finds in recent memory, as one of the tomb’s mummies is believed to be Egypt’s female pharaoh, Hatshepsut.

Given its special place in the history of archaeology, Ryan believes that excavating in the Valley of the Kings is a very special honor. “We are learning a lot from looking at these undecorated tombs and we were happy to be back once again in 2015.”

Ryan is now in the process of preparing results of his excavations for publication, and he hopes to return to Egypt soon to continue working on more tombs in the ancient royal cemetery. PLU remains his stateside base-camp and he occasionally teaches Egyptology courses and involves his students in his research. 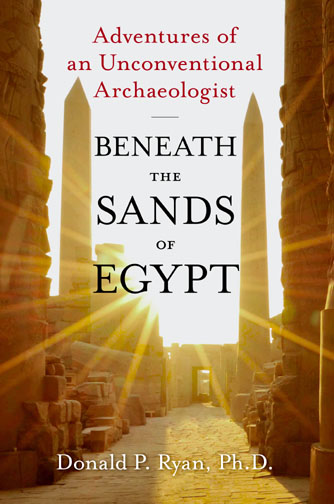 Information about his research, books and more.