FEDERAL WAY, Wash. (Aug. 6, 2015)—Ann Kullberg ’79 has never taken a formal art course, but her work is internationally known—and her story is as colorful as her art. Though the lines were not always straight, and there were rough patches along the way, Kullberg creates colored-pencil masterpieces.

Born in rural Japan to Lutheran missionary parents, Kullberg lived there until she was 7 and has loved drawing for as long as she can remember. She said her parents were incredibly supportive, always making sure she had art materials even “when the budget was already stretched too tight, and there really was no extra money.”

Arriving at PLU in 1975 from her new home in Oregon, Kullberg was drawn (pun intended) not to art but instead to classes in Japanese, thanks to her love for the people, language and culture of Japan. But because the professor who taught Japanese at PLU had retired, she pursued an Education degree.

Now a resident of Federal Way, Wash., Kullberg lived in Stuen Residence Hall all four years at PLU. The art building was visible from her window, so she watched art students go to class, never considering herself “good enough” to take an art class herself.

Her own artistic epiphany came later, after graduating, marrying, moving back to Oregon, teaching English for a few years in a rural school, returning to Washington—and seeing a colored-pencil drawing at a relative’s house. These pencils were not just your usual Crayolas, Kullberg thought, and she was captivated that professional brands could be used as an art medium.

Kullberg then bought her first set of 24 Prismacolors.

(Little did she know that years later, the company would contact her to buy partial rights to her artwork Broken Rules to showcase on Prismacolor Colored Pencil tins. The painting—colored-pencil artwork is called “painting”—still appears on Prismacolor sets.)

Kullberg entered her first painting in the Kitsap County Fair at the suggestion of a neighbor and won first prize. This was just the confidence boost she needed. She thought, “I can do this!”

And so she did. She made her first sale to her kid brother, and this “set a course for her life,” she said. Within a year, she had gallery representation in Oregon and had sold seven more paintings. But it wasn’t enough. Kullberg was divorced, and one of her two children, then 2, was so ill that he was hospitalized every four to six weeks.

Her moxie to support herself and her children drove her to pursue her art with great energy. “As Einstein said, ‘In the midst of every crisis is an opportunity,’” Kullberg said.

Her “big break” came with her first portrait commission. From this sale, she received 13 more commissions in two weeks.

It wasn’t until 1997, though, that Northlight Books changed her life by asking her to contribute a chapter on portraits for a colored-pencil book by Washington artist Gary Greene. Kullberg wasn’t paid, but a year later, Northlight Books called her back—and asked whether she would like to author her own book. 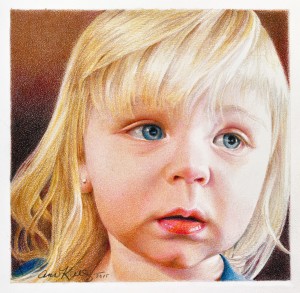 And her work has been published in: 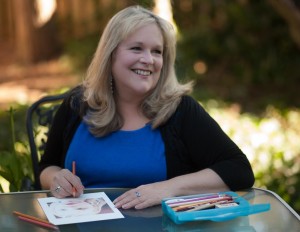 “I was ecstatic,” Kullberg said. “I even remember where I was standing when the call came. There were not many colored-pencil books out there at the time.” (Her Colored Pencil Portraits Step by Step is still one of the top books in the art market for painting portraits.)

Kullberg said she believes hand-drawn art is critical in this age of technology. “The moving of the hand goes through the prism of the soul,” she said. “It puts one’s mark, heart and life to it. Something happens between the eye and hand as it goes through the artist.”

Kullberg believes anyone can learn to draw with the right training. In 1999, when the Internet was not what it is today, a woman in Texas emailed Kullberg, wanting to take private online lessons. As a result, Kullberg pioneered online art lessons on her website, AnnKullberg.com, via an online magazine. (Kullberg even established the magazine itself, COLOR, at the suggestion of her daughter; it’s still going strong today, digitally and in print.)

Her website is an art lover’s dream: She offers project kits (her own and those authored by fellow artists) with very clear step-by-step instructions and the tagline, “We Teach. We Inspire. You Shine.”

Although she retired from taking portrait commissions eight years ago, Kullberg has taught in 44 states and in Canada; on international cruises; and in the United Kingdom, Australia and Japan. And as she gathers acclaim, so do her students: The American Art Company in Tacoma, the oldest gallery in the Northwest, ran an exhibition, “Pencils and Palettes,” in which four of the eight artists had been Kullberg’s students.

Kullberg recalls her own time as a student as incredibly influential. “PLU really challenged me to grow, and I really appreciated that,” she said. “I am grateful for my education, for the challenge and discipline it taught me. PLU served me well.”

And she advises current PLU students to go with the flow of life, wherever it leads. “Life is what happens when you are making other plans,” she said. “Keep open to opportunities as they present themselves. I didn’t give up. I determined I would be successful in whatever I did, whether teaching English, cleaning houses or drawing.”