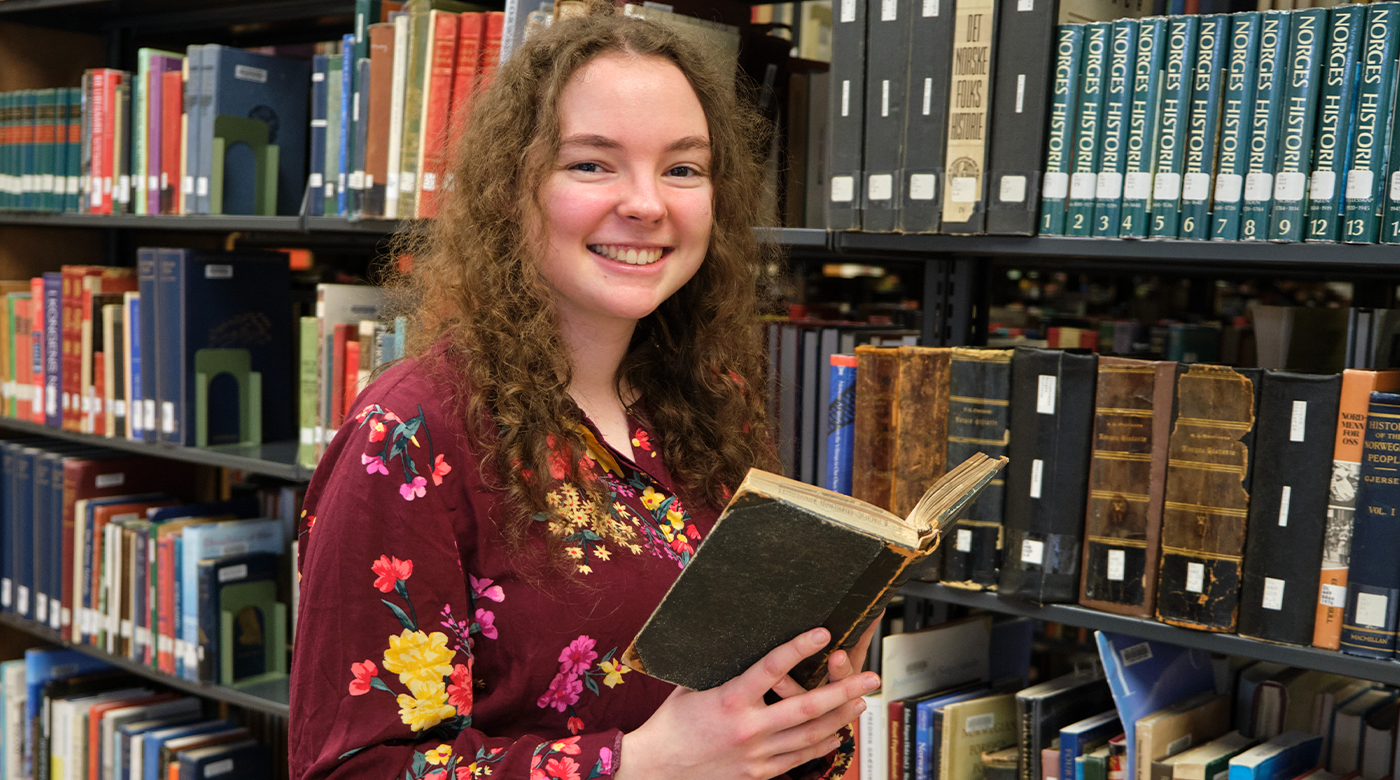 Kathryn Einan ‘22 is a self-proclaimed “book nerd.” Einan is a triple major in Literature, History and Nordic Studies with a minor in Chinese. She has a deep love of learning and hopes to become a teacher one day.

“There are so many interesting things to study!” says Einan about her impressive triple major. Einan came to PLU with the intent of being a history major and possibly an English minor. Still, she loved her English classes so much that her English minor quickly became a second major. Einan’s love of books made literature a natural fit.

“I’ve always been a book nerd. I read multiple books in a week,” says Einan. “I have piles of books at home. I go to the used bookstore all the time.”

Einan loves many books, making it impossible for her to choose a favorite. She has a special passion for classic literature, including authors like Jane Austen and Oscar Wilde.

“She was sitting in the front row, pen in hand, notebook out, and with a copy of “Pride and Prejudice” ready for class discussion. I welcomed Kathryn’s enthusiasm for the course, especially given that each year fewer students seem to be aware of the influence that this British literary celebrity has on the popular culture that they watch,” Ramos said “I soon learned that she was taking the course out of an already well-established love for Austen, a love that I have benefitted from not only as Kathryn’s teacher, but as a collaborator. Her intelligence is paired with a sharp sense of humor, which she conveys both in conversations and her writing.”

In addition to her love of literature and history, Einan loves learning languages. She began studying German in high school. In order to complete PLU’s language requirement, Einan decided to try learning Norwegian.

“My dad’s family came from Norway, so there is a family history that I wanted to honor,” Einan says. Einan enjoyed her Norwegian classes and chose to move forward with a third major in Nordic Studies.

This year, Einan added Chinese to her coursework. “I think it is really important to study languages because they are how people communicate,” says Einan. She sees a strong connection between her language studies and her love of literature. “I would really like to be able to read books from different cultures in their original languages.”

After graduation, Einan will begin work on her Master of Education degree at PLU. She hopes to become either a high school history or English teacher. She may also do some studies in library sciences. She wants to travel and gain conversational experience in the languages she is studying. Einan hopes to be a lifelong learner, and to inspire others to do the same.