PLU students present ‘The War of the Worlds’

PLU students present ‘The War of the Worlds’ 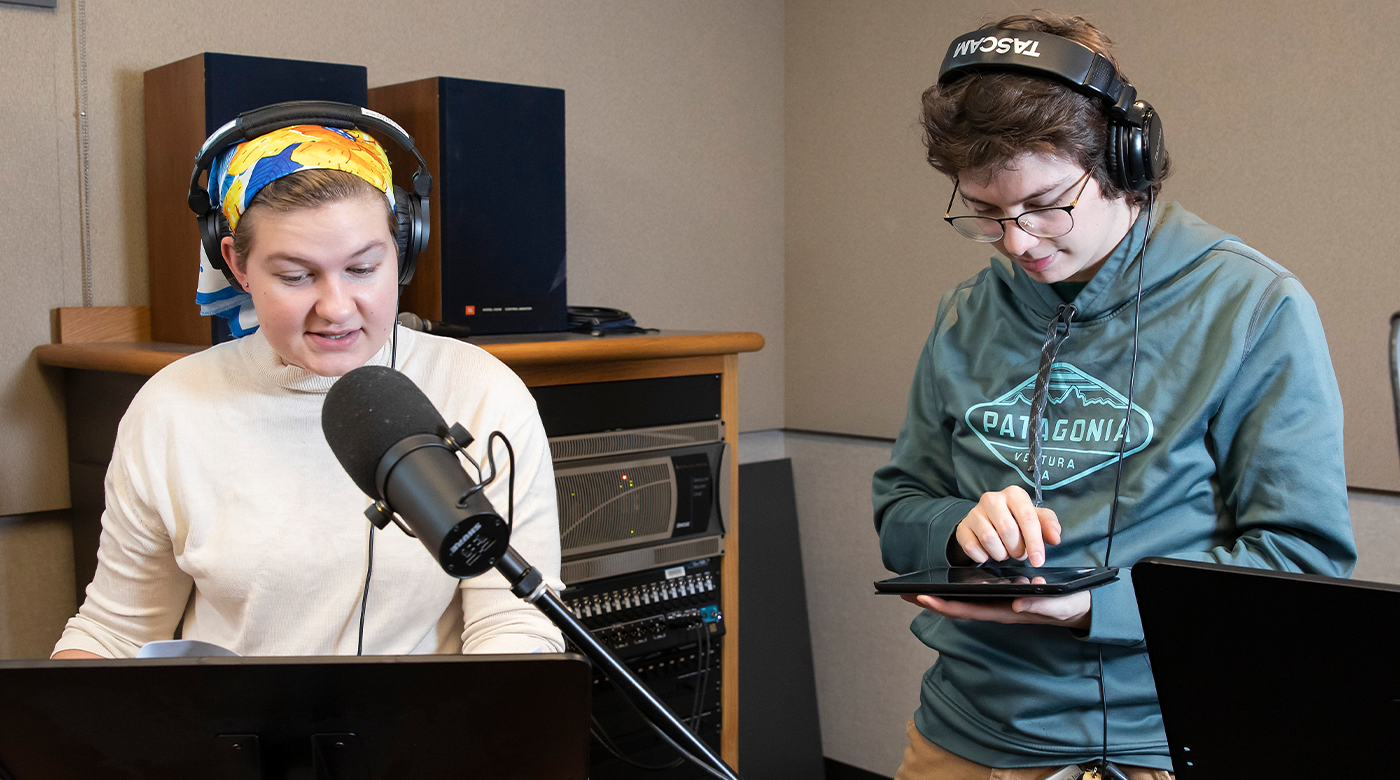 Image: PLU students Zivia Rich ’24 (left) and Fulton Bryant-Anderson ’23 (right) are recording the independent production ‘War of the World’, which will premiere on Sunday, Nov. 27, on LASR. (PLU/Photo Sy Bean)

Theatre major Zivia Rich ’24 loves a good story. She is especially fond of them in the form of a radio show or podcast. Growing up, the Seattle-area native spent much of her time listening to KUOW, their local National Public Radio station.

“We have a radio in my kitchen, right above where we cook, so pretty much I’d wake up, come into the kitchen and KUOW would be on every single day,” Rich said. “So that style of radio is very close to my heart.”

This fall, Rich is pairing her love of audio storytelling and theatre education to create an independent production of “The War of the Worlds.” Based on the H.G. Wells novel, the show’s themes include colonialism, superstitions and prejudices — topics Rich believes are still prevalent today.

“I can’t speak to what H.G. Wells was thinking when he was writing it, but a lot of it is more inwardly reflective,” Rich said. “The Martians coming down are a lot more evocative of British imperialism than they are of an outside force.”

Orson Welles’ production of “The War of the Worlds” is a mock radio broadcast reporting an alien invasion in New Jersey. When it debuted in 1938 during the Halloween episode of The Mercury Theatre on the Air broadcast, it was met with panic as some listeners thought it was real. The story’s themes and Rich’s love for audio storytelling prompted her to put on a slightly updated production.

Despite not having podcast experience, Rich is receiving support from professors and students for her independent production.

“My research for this included contacting professors and students who have worked on independent shows at PLU, and figuring out how their processes translate to my process,” Rich said. “I’ve gotten a lot of help from people who worked on “Twisted Tales of Poe,” which was produced two years ago.”

That support includes Fulton Bryant-Anderson ’23, the LASR General Manager, and Mykahla George ’25, the production’s stage manager. Bryant-Anderson has taken the time to offer his expertise on the technical side of audio storytelling.

Rich’s performance of “The War of the Worlds” will debut on Sunday, Nov. 27, and can be streamed on the LASR website at plu.edu/lasr.