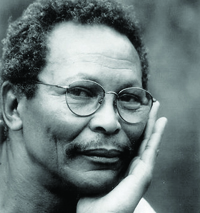 Earl Lovelace was born in Toco, Trinidad, and has lived most of his life on the islands of Trinidad and Tobago. His books include The Wine of Astonishment, While Gods Are Falling, winner of the BP Independence Award, the Caribbean classic The Dragon Can’t Dance, and Salt, which won the 1997 Commonwealth Writers Prize. He is the author of the new novel Is Just a Movie, published by Haymarket Books. The novel was named the Grand Prize winner of the 2012 Bocas Literary Festival.