The Saint John’s Bible at PLU

The Saint John’s Bible will be on display at PLU from September 2016 through May 2017. (Photo / John Froschauer, PLU.)

The Saint John's Bible at PLU

The Lutheran Reformation was inspired by the scholarly study of the Bible as a charter for the reform of church and society. As PLU begins to mark the 500th anniversary of Lutheran education, we welcome to the campus the first hand-written and illuminated Bible created since the invention of the printing press in the 15th century. Commissioned by the American Benedictine community of St. John’s Abbey and University (Collegeville, Minnesota), the Saint John’s Bible was brought into existence in order to ignite the spiritual imagination of all persons who reflect on the biblical text and meditate on its many striking images. 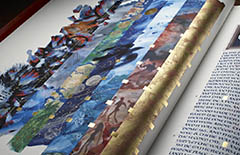 A Bible for Everyone

Get an intimate look at this revolutionary, illuminated Bible created in community and learn how its themes mirror PLU’s mission.

A collaborative effort begun in 1998 and completed in 2011, the creation of the Saint John’s Bible brought together anthropologists, artists, book printers, botanists, computer scientists, graphic artists, historians, linguists, poets and scripture scholars – a group that looks very much like a university.

Thursday, Sept. 15, marked the official opening of the Saint John’s Bible at PLU, with a presentation by Suzanne Moore, a contributor to the Bible.

The title of her presentation is Dynamic Collaboration: One Painter’s Perspective on Illuminating the Saint John’s Bible. One of only two American artists chosen to create illuminations for the Saint John’s Bible, Vashon Island (Washington) resident, Suzanne Moore, worked on this ‘Bible for the 21st century’ over a span of 10 years, beginning in 2001. Challenged by creative director Donald Jackson to develop images unlike any seen before, Moore worked closely with the Committee on Illumination & Text at St. John’s Abbey and University to develop original illuminations of extraordinary beauty and power. She will offer insights into the approach, creative process and techniques she used as a contributor to this modern-day Bible.

There will be opportunities for faculty to bring their students to the SJB or simply sit in on a docent-led discussion of the book and the illuminations in Mortvedt Library from September 2016 through May 2017.