By Barbara Clements and Steve Hansen

Once a month Karl Stumo, vice president for admission, his wife, and his three children dine at the University Center’s new dining commons. The five sit together and have what would otherwise be a nice family dinner, square in the middle of hundreds of bubbly university students. For him, it is a telling moment. 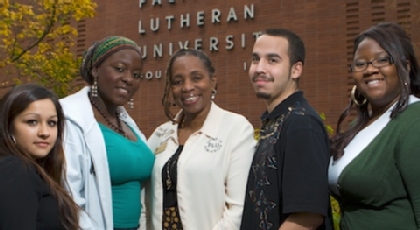 Once a month Karl Stumo, vice president for admission, his wife, and his three children dine at the University Center’s new dining commons. The five sit together and have what would otherwise be a nice family dinner, square in the middle of hundreds of bubbly university students. For him, it is a telling moment.“There are so many students there, from so many different places. There is so much energy in the room,” he said. “It is such a great example of what PLU is, and what it will continue to become.”

“There are so many students there, from so many different places. There is so much energy in the room,” he said. “It is such a great example of what PLU is, and what it will continue to become.”

PLU’s international student body is changing. So is the ethnic makeup of PLU’s domestic student population. Together, PLU is continues to grow into a stronger, more diverse place.

International focus, abroad and at home

A lot of this has to do with PLU’s history. PLU always had an international focus inasmuch as it was very connected to Norway. By the late ’70s, things were beginning to fundamentally change – PLU was becoming more globally focused.

By the early ’80s, according to Phil Nordquist’s history of PLU, “Education for Service, Pacific Lutheran University, 1890-1990,” the university was a “showcase institution” in the handling of global studies, as determined by to the U.S. Office of Education. PLU professors soon began traveling to China to teach and, students were starting to study abroad. By 1988, 6 percent of the student population had citizenship of someplace other than the United States.

Historically, students from Norway have been the largest international group – there are 26 Norwegian students on campus this year, about 9 percent. As recently as two years ago, however, the steady increase of Chinese students has ensured that the largest foreign-born student group is from mainland China – there are currently 83 Chinese nationals studying on campus, 29 percent of the international student population. It is a trend consistent with universities across the country. As China grows in prosperity, this will undoubtedly continue to be so.

Some of that has to do with having Embassy Center for English Studies, a international firm that places non-native English speaking students in universities worldwide. The students come to Embassy’s classrooms in Eastvold, work on their English skills and, in some cases, matriculate into the PLU program. It is another way PLU ensures a lively and diverse student population stays on campus.

“Embassy has been a key factor in bringing thoughtful, articulate, engaged international students to the PLU campus,” Stumo said.

Washington is changing, too

The face of PLU is changing in another way, as well. PLU will be seeing a significant rise in student populations that are not Caucasian.

It’s important that PLU’s ethnic diversity begin to reflect this growing trend, he said. Currently, students of color comprise 17 percent of the student body at PLU. Both Stumo and Melannie Denise Cunningham, PLU’s coordinator of multicultural recruitment, want that percentage to grow as more multicultural students find out what PLU has to offer.

“PLU has always seen itself as a part of, not apart from, the Parkland and Tacoma community,” Stumo said. “That means that the university seeks to reflect and serve the local area. As the region grows in richness and diversity, PLU makes the commitment to be a place that includes and serves students, faculty, and staff of color from our area.

“The university’s future depends in part on its ability to be inclusive and equitable to all,” he said.

For PLU admissions staff this outreach is crucial – for both the university and the families. Families will need time to mull over the idea, as they “may not have thought about college as an option that’s because no one in their family may have ever been to college,” Cunningham said.

“If they are going to make a substantial investment, they need to know that truly, the university they choose is a place their student will call home,” Cunningham said. “We want the students to know that they can come to PLU and be their authentic self.”

That’s true for Adrian Aguilar ’11. Born in Mexico and raised in King City, Calif., he is a first-generation Latino working on his degree in social work. For him, there have been challenges going to PLU, not the least of which being that, coming from a high school that was 75 percent Latino, there aren’t many attending PLU. But he is comfortable here – he loves the community – and feels that he can be his authentic self.

That’s important. Because every time an Adrian Aguilar comes to PLU and finds his place, it means others, behind him, will do so to.

So what will it take to make sure that more Hispanics will be attending PLU in the future?

“You might start by accepting more Latinos,” said Aguilar with a big laugh.

He doesn’t have anything to worry about. The Latinos are coming. So are the Chinese and the African-Americans – and numerous other diverse student populations.

And PLU will be a better place for it.