In 2006, international journalists gathered around a relatively unknown skater, preparing for the usual lines about the long journey to winning an Olympic gold medal and thanks to mom and dad and his coach for supporting him. But that’ not the speech they received from Joey Cheek. 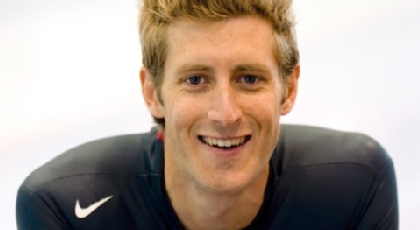 Joey Cheek, gold medalist and humanitarian, will speak at the Wang Center Symposium in March.

Cheek refused to speak about his victory, a move that shocked the journalists crowding around him. Instead, he spoke out on behalf of the people of the Darfur region of the Sudan.

“I know you guys all want to do sweet stories about Hallmark and chocolates and butterflies and all that, but I’ve always felt that if I ever did something big like this, I wanted to be prepared to give back,” he said. “I’m going to be donating the entire $25,000 sum the USOC gives me to Right to Play.”

He then encouraged all the Olympic sponsors to match his amount. He followed up days later by donating another $15,000 he received for winning a silver medal to the cause of helping Darfur. He specifically targeted the $40,000 to the refugees in Chad, where at the time there were 60,000 displaced from their homes.

One reporter described Cheek as “an antitoxin for those who have been fed a steady diet of showboating, sniping and self-absorbed Olympians.”

“Cheek showed what happens when the Olympic torch falls into the right hands,” chimed in a Los Angeles Times reporter. “When (the torch) belongs to someone who will use it to illuminate the world’s problems and try to solve them. It was the most surprising, enlightening news conference I’ve ever seen.”

A native of Greensboro, N.C., Cheek grew up as an inline skater and made the switch to ice skating in 1995. Doing so required an international cross-continent move from North Carolina to Calgary, Canada – all at sixteen years old.

Cheek captured his first international medal, winning bronze in the 1,000-meter event at the 2002 Winter Olympic Games. By 2006 he had claimed more than 20 international medals, including the title of World Champion. At the 2006 Olympic Winter Games in Torino, Italy, Cheek, 26, realized a lifelong dream by capturing the gold medal in the 500-meter competition. He went on to win the Olympic silver medal in the 1000-meter event.

After his talk and donations, he partnered with Right To Play, an athlete-driven international humanitarian organization that uses sport and play as a tool for the development of children in some of the most disadvantaged areas of the world.  He has gone on to raise nearly $1,000,000 for charitable efforts.

Before he was 30, Cheek has been lauded by U.S. presidents, spoke to Congress and notables such as Speaker of the House Nancy Pelosi, and hobnobbed with stars such as George Clooney, been featured on a Wheaties box and been vetted with national and international humanitarian awards.

He has been awarded or noted on Time Magazine’s 100 Most Influential People in the World list, People Magazine’s list of the most interesting people of 2006.   He was a finalist for Sports Illustrated Athlete of the Year, was the inaugural recipient of the Heisman Trophy’s Heisman Humanitarian Award and was named the U.S. Olympic Committee’s Athlete of the Year as well as the U.S. Speed Skating Athlete of the Year. He has testified before Congress regarding the crisis in Darfur.

In 2006 Cheek participated in the Clinton Global Initiative where he officially founded and launched the Darfur action organization ‘Where Will We Be?’

Through WWWB, Cheek will gather an international coalition of champion athletes to join him on a trip to Darfur to continue to raise awareness and work toward a resolution of the crisis.

Cheek is attending classes at Princeton University, where he enrolled in 2007, and is studying economics. But his passions still lie with helping the people of Darfur and with humanitarian issues. That has not always gone over well with authorities in countries where human rights has been an ongoing issue.

Just days before the Opening Ceremonies of the 2008 Beijing Games – the Chinese Embassy in Washington contacted Cheek to inform him that his previously issued visa was revoked. The official who called Cheek stated simply that he was “not required to give a reason” for revoking visas. Cheek planned to attend the Games to support the more than 72 Team Darfur athletes competing in Beijing, while also drawing attention to the on-going Darfur genocide and what China and the international community could do to stop it.

Based on comments made in 2009 to the Washington Post, in which Cheek was described as one of the few activist-athletes left, China will likely be hearing from Cheek again. Chinese is one of his minors at Princeton.

Cheek will be the keynote speaker at the upcoming Wang Center Symposium: Understanding the World Through Sports and Recreation on March 4-5.