The silence of the ghetto in 1940s Holland is broken by whistling, shouting and the thud of doors being kicked in by the S.S.

The teenage Philip Wagenaar, lays in his bed waiting for the horror. He knows the Nazi soldiers are there to take Jews away to concentration camps. 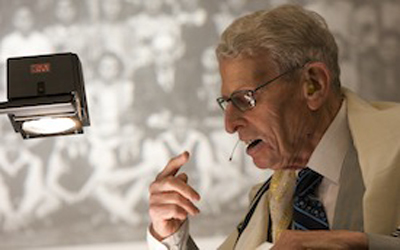 He’d heard rumors that a trip to one of these camps meant death. His parents and grandmother stay silent in the living room and his brother hides.

“Raids were the order of the day,” the now 85 year-old man told the assembled crowd at the Third Annual Powell and Heller Holocaust Conference on Friday.

One day, a S.S. soldier bursts into his room screaming “Jew out. Jew out,” pointing a rifle to his head.  “I knew if I complied it would be the end of my life,” Wagenaar said.

So, he did what had worked before. He scrunched up his face and curled up his arms and began shaking, pretending he was sick or insane. The Nazi continued with his demand “Jew out. Jew out.” Wagenaar kept his convulsion-like state.  The demand continued, “Jew out. Jew out,” but the volume became quieter each time. The S.S. solider then said softly “He’s crazy.”

The Nazis left that night, without his family, but Wagenaar new it would only be a matter of time before they came back. His brother and him left the ghetto apartment that night and hid in the streets and courtyards of the trapped neighborhood. His parents and grandmother refused and stayed in the apartment. Wagenaar and his brother would never see them again. Years later, they’d find out they died in a concentration camps; his mother and father only weeks before liberation.

Wagenaar survived; though there were many close calls.  He became a doctor, a husband, a father. He tells his story to schoolchildren. He tells it to people, like those gathered for the Holocaust Conference at PLU.  Wagenaar doesn’t let the past consume him.

How to live really comes down to a simple and often-used rule he said, “Don’t do to anyone else what you wouldn’t want done to you.”

Waller called upon his audience, whom he referred to as “people of leverage,” to use the power they have with acquaintances and friends.

Waller recalled the opportunities he’s had to interview those on the “front-lines” of genocide—the people who actually do the killing, he said. From these interviews, Waller described murderers who were not “dead behind their eyes,” or psychotic as many people assume, but instead regular people:  someone’s son, sometimes a member of faith. Waller stressed early on in his speech that “it’s ordinary people like you and I who commit this type of extraordinary evil.”

He reminded the audience that the power of ordinariness lay not only in evil, but also in good. “I want to impress upon you the power you have as an ordinary person in a world with genocide,” said Waller.

After referring to the audience as people of privilege the whole time, he advised them of the vast responsibility attached to that privilege, describing the Social Contagion theory as a call to action. According to this theory, one’s opinions hold at least some weight to the approximate thousand people within three degrees of separation from one person. “You know a lot more people than you think, and can impact,” Waller said.

The Third Annual Holocaust Conference was kicked off Thursday night by an examination of the slave labor camps the Germans set up around Poland and Germany to power their war machine.

Prof. Christopher Browning, Frank Porter Graham Professor of History at the University of North Carolina in Chapel Hill, and a former PLU professor who taught in the university’s history department for 25 years, discovered this after following the trial of one Nazi guard at a work camp. The guard was acquitted in a 1972 trial, but upon further digging, Browning quickly forgot about this low-level guard, and focused on the slave labor camp where the guard had been stationed.

“I found that a much more interesting story than Mr. Beck,” Browning said, as he gave the Eleventh Annual Raphael Lemkin Lecture, during last week’s Holocaust Conference.

After scouring more than 200 testimonies, including dozens Browning collected himself between 2000-2006, Browning was able to peace together the creation and daily life of the Jews who lived and survived the slave labor camp of Starachowice, Poland.

Because the work on the munitions and steel factory was considered critical to the war movement in Germany, relatively large numbers – 700 out of 2,400 who went into the camp – survived, even when the group – including young children – to Auschwitz, since they did not have to go through “selection” at the front gates of the death camp, Browning told of packed room of over 200 people who listened to his presentation last Thursday night.

Browning had to rely heavily on witness testimony of these survivors, “since while bureaucratic Germany was not very good at destroying documents, the business Germany was.” Starachowice was run and operated by private businesses who had contracts with Nazi Germany.

This camp was created when the nearby Jewish town of Wierzbnik was emptied. Because of a series of unique quirks of the camp’s existence, it became a haven for the Jews on the outside who were facing extermination as the Nazi’s ramped up their “final solution.” Because they were producing goods for the state, the Jews, even when ill, didn’t die in the camp, Browning noted.

And because there were some guards, though few, sympathetic to the Jewish population, children were slipped in and hidden in the camp. Many guards who were not sympathetic could be bribed, and warned the Jewish families when inspections of the camps were about to happen so the children could be hidden. A thriving underground economy between the sympathetic Poles and the Jewish prisoners developed.

“It was actually easy to slip in and out of the camp,” Browning said. “The private guards hired by the businesses were charged with keeping the unauthorized personnel out, not with keeping the Jewish prisoners in.”