This year, ten PLU students and five PLU staff will return to Antigua, Guatemala for the first time in five years on an Alternative Spring Break trip.

In fact, Antigua is where PLU first traveled for Alternative Spring Break, led by three of the leaders for this year’s trip. 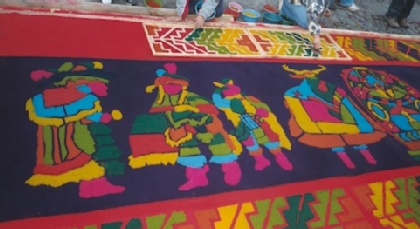 This year’s alternate spring break will take 10 students and four faculty to Guatemala. There, the group will see famous carpets, known as “alfombras.” Created by the families or businesses who reside street-side, these carpets fill the street and are created by taking sawdust and dye made of palm plants, pine needles and produce.

In 2005,  Sheri Tonn, vice president for finance and operations, and university ministers,  Rev. Nancy Conner and Rev. Dennis Sepper, led the first trip to Guatemala, excited to volunteer their time at Common Hope and experience some of the world’s largest Holy Week festivities in Antigua.

This year, spring break and Holy Week align once more.

These students will experience a rich culture. Semana Santa, or Holy Week, is what  Tonn called “the sum of all the events.” She turned to event listings and processional maps to show the magnitude of Holy Week.

Sepper painted the picture of vivid color. Calling it a “unique experience because it engages all of the senses,” Sepper described the sights, sounds and smells of Holy Week in Antigua.  He described the contrast of the Holy Week festivities to the standard “adobe color,” common to the city built by the Spaniards.

“The processions and carpets are an explosion of color,” Sepper said.

Elise Erickson and Kyle Franklin, campus ministry staffers and leaders on the trip, talked about the famous carpets, known as alfombras, and it was images of these intricate carpets that were part of the initial draw for Emily Isensee, one of the ten students participating in Alternative Spring Break this year.

Created by the families or businesses who reside street-side, these carpets “fill a street,” according to Sepper. As part of the trip, the students will observe the creation of the carpets. The “carpets” are created by taking “sawdust and dye and creating these incredible carpets for the processionals to walk on – they’re incredibly colorful, both sacred and secular,” Sepper said.

The carpets vary depending on which day of Holy Week they are created,  Sepper said, referring to the agricultural themed carpets on Palm Sunday, made of palm plants, pine needles and produce.

As if the alfombras aren’t spectacular enough, lengthy processionals tread over them, from sun-up to sun-down. Sepper described the 2,000 pound, incense-laden floats, carried by 90 or so men, who each wore robes corresponding to the liturgical color of the day.

“The floats look like they’re walking the way they’re carried,” Sepper said. Contrasting the often vibrant colors of the carpets and robes, the processionals are accompanied by what Sepper called a “brass, funeral dirge.”

On top of the culturally rich festivities of Holy Week, Alternative Spring Break participants will have the chance to meet Marvin Barrio, the Guatemalan child University Congregation has been sponsoring for almost ten years now.

“I’m really excited to meet Marvin. I’ve been hearing about Marvin since I was a student here,” said Erickson.

The three returning leaders have already met Marvin before.

Marvin Barrio is sponsored through Common Hope, which provides educational scholarships and needs for Guatemalan children. The organization is also housing participants of this year’s Alternative Spring Break. Though there are no planned projects during the stay, PLU students and staff will volunteer their time for whatever small projects Common Hope might have for them.

When Common Hope was first came to Guatemala 25 years ago, the organizers asked residents what they wanted help with in their communities. They expected to hear wells or help raising money for vocational colleges, said Franklin.

“But to a person, they all told Common Hope organizers that they wanted their children to go to school,” Franklin said. Franklin has heard about Marvin since he was a student at PLU, and can’t wait to meet him. The organization runs by raising money to help the local children go and stay in school.

“It will be the highlight of the trip,” he said.

Franklin and other participants left last Thursday, and will return to the Northwest on Easter Sunday.