Upright dignity:Making a difference, one wheelchair at a time

In the distance as the dust sifts through the air, a middle-aged Iraqi man walks to a makeshift United States military medical station. Draped in his arms is a young child, his son. It is apparent the boy does not have the use of his legs. His father has brought his son to get a wheelchair.

As the father and his boy get closer to the station, soldiers tell him, “You don’t have to carry him the whole way. We have a wheelchair for your son.”

The father calmly says, “I’ve carried him his whole life and I can carry him these last few feet.” In the father’s eyes, it is not a burden to carry his son. But he’s joyful to be able to give his son the freedom that so many take for granted. 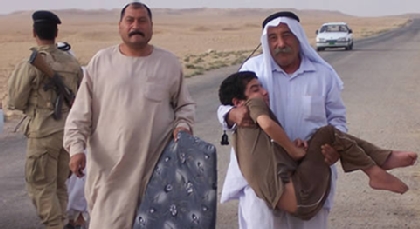 The journey this family has taken is not entirely unique in Iraq, said Lt. Col. David Brown ’90, and current PLU MBA student. Brown said it also was not unusual to see children without family members to carry them often drag themselves hand over hand.

As a doctor stationed in Iraq in 2005, Brown first started hearing reports of children without the use of their legs in the city of Mosul. Platoon leaders would report the sight regularly.

“I really wanted to do something,” Brown said, “but I really had no capacity to help.”

Then one day, Brown and Brad Blauser, a private contractor at the time, were in chapel at their base in Iraq when Brown’s frustration boiled over. Blauser had been looking for a way to make a difference and wasn’t sure what he should do. Brown told him what he’d seen with his own eyes.

Blauser asked, “What do you need?”

Brown replied, “What I really need are pediatric wheelchairs.”

And so began Wheelchairs for Iraqi Kids.

Before Brown knew it, Blauser had taken charge of finding wheelchairs, funding, and anything else he could think of to propel their vision.

“It’s easy to be frustrated when you see a great need,” Brown said, “and you don’t think you have the resources to meet the need.”

It wasn’t too long after Brown and Blauser first spoke that a shipment of 31 wheelchairs made it to Iraq. Since, there have been more than 720 wheelchairs given to Iraqi children. All of which carry a story, not unlike the father who carried his son his whole life.

“Giving them the dignity and respect of being up off the ground,” Brown said, “I just think that’s a great gift.”

Many of the soldiers who have been part of this program have told him the same thing over and over again.

“This is the one great thing I’m going to remember from my deployment,” Brown said.