It all started so simply, yet signs were there. In the spring and summer of 1969, I was looking for my first college teaching job as I completed my graduate music degree at the University of Michigan. Like so many seeking their first real job, I had cast a wide net, applying for any and all positions that vaguely aligned with my interests, training and abilities.

One such position was at a small Lutheran university in the Pacific Northwest. I knew little of the school or the traditions out of which it had grown, but I had visited the Northwest on several occasions. On one such visit, at the prescient age of 14, as I looked at Mt. Rainier on a clear day from the Olympic Hotel in Seattle, I announced to my bemused parents that “this wouldn’t be a bad place to settle down someday.” 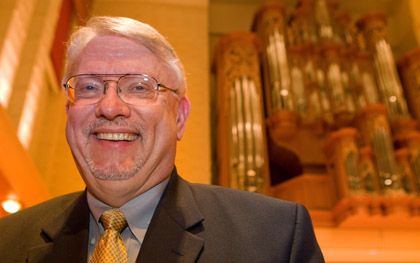 David Robbins, Chair of the Music Department at PLU.

Little did they know, as I was raised and they remained on the East coast, that they had many cross-country flights ahead.

The 1970s at PLU were a time of change, a theme I later realized would repeat itself regularly. The 4-1-4 calendar was in its first iteration, with the January term called the Interim. Students were required to take two interim courses in their four years; faculty was encouraged to teach innovative courses outside the regular curriculum and even outside their specific disciplines. President William O. Rieke came to PLU in 1975 and soon after capital construction projects resumed, including plans for a new, much-needed music/fine arts facility. At the time I didn’t believe those who told me that academic buildings take between 15-20 years from conception to completion. The envisioned building was approved in concept in 1978 and the Mary Baker Russell Music Center was completed in 1998 – exactly 20 years! I’m grateful to have been in on the project from the very beginning and to have witnessed the enthusiasm and support of two presidents toward realizing that dream over two decades.

The 1980s saw the emergence of study away as an important PLU facet. The Rieke Science Center was completed, faculty governance grew stronger and recruitment of new students became increasingly focused. Academic programs grew stronger and new programs were undertaken. At the end of the decade, the university celebrated its centennial, with a year long celebration that included the world premiere of my colleague Gregory Youtz’s opera on Northwest Native American history and simultaneous international tours to China (by the Choir of the West and University Orchestra) and to Norway (by the Wind Ensemble and University Chorale), thereby affirming both our place on the Pacific Rim and our Scandinavian history.

The times of change returned in the early 1990s as enrollment downturns of the previous decade finally hit PLU and the university entered uncertain economic times. PLU’s current president, Loren J. Anderson arrived and led the university through those turbulent times. The university emerged in the new millennium with additional focus and fiscal discipline. Long-range planning and short-term initiatives were instituted, the former producing planning documents titled PLU 2000 and PLU 2010, the latter involving annual creation, monitoring and assessment of shorter-term goals. The university is currently in the first year of a three-year, pan-university cycle to produce the next planning document, PLU 2020. The last decade has seen strengthening of our three institutional hallmarks: ever-increasing numbers of students participating in study away, increased student-faculty research and, thanks to the support of the Lilly Foundation, continued emphasis on leading intentional lives by exploring and seeking vocation.

On that fateful quick visit in the summer of 1969 it was the people of PLU who impressed me the most and made my decision to join this community so easy. I met a few faculty and administrators that day, including Maurice Skones, my earliest mentor and predecessor as chair of the music department. In the subsequent years, I have counted myself blessed to have worked with so many distinguished colleagues across the campus: from the faculty, the administration and the staff. And it didn’t take me long into my first term of teaching here to realize how special the PLU students are!

We in music have always engaged in student-faculty research since our common enterprise is to make music together. In many ways (technology, multitasking!) the students have changed. But in the most fundamental ways (passion, commitment, talent) they remain the best indicator of PLU’s uniqueness.

Just as the student body renews itself with each new class, so too does the faculty, but on a slower time schedule. The decade past has also been marked by a sea change in the makeup of that faculty. Colleagues of my generation at PLU (we came in the ’70s and stayed) have retired after long and satisfying careers, and a whole new cohort of committed PLU faculty are beginning their careers here. My hope for them is a professional and personal life as full, rich and sustained as I’ve enjoyed at this very special place.

David Robbins is professor of music and chair of the music department.