The table in David Akuien’s South Hall apartment is covered with textbooks and worksheets, filled with meticulous notes.

He sits down at the table and spends hours studying – this day it’s for an environmental studies test. 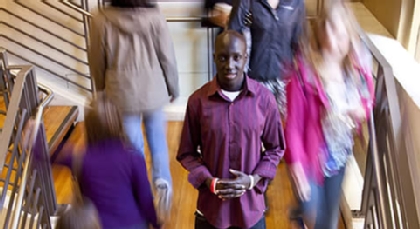 David Aukien doesn’t blame or lament on the hardships he’s experienced. “It’s the card I’ve been dealt and you just have to deal with the card you’ve been dealt.” (Photos by John Froschauer)

The glow of a television is behind him – it’s always on ESPN.

“People like them can keep me on track everyday,” he said, pointing to the posters. “In the midst of war, people like me are still learning what they did.

“These guys aren’t alive, but their words are still very much alive.”

The study area, the décor on the walls is all very much Akuien.

For the first 12 years of Akuien’s life he did not have a home, at least not the way most people think of one.

He had places to live, but the word, the meaning of home was lost. The comfort and safety associated with home did not exist.

Since, the place the 22 year-old has called home the longest has been Tacoma, Wash. – the past five years at Pacific Lutheran University.

This May, Akuien (pronounced “A – Q – En”) will graduate with a double major in communication and political science with minors in conflict resolution and religion.

The first years of his life were spent traveling, or rather escaping from the horrors of a civil war in Sudan.

“I was born into this chaos right away,” Akuien said.

He is one of almost 4,000 “Lost Boys,” who escaped a life of war and faced the fear of the unknown for a chance at a better life in America.

“Luckily, I was one of the children chosen to come here,” he said.

David Akuien ’10 admires a painting series in Mortvedt Library on world conflict. The painting is by Nick Butler.

Life at PLU wasn’t automatically easy for Akuien. He felt different. He was different.

He’d sit in a class and hear the problems his fellow students would talk about and realize how disconnected they were from the horrors of his past.

“I didn’t identify with anybody,” he said, “That was the thing that frightened me.”

But through the guidance of people like retired senior advisor for academic success Rick Seeger, by getting involved in campus organizations and even working in PLU’s Conferences and Events, PLU became his home. He and his co-workers would organize groups hosted on campus.

“We were the ‘go to’ people,” Akuien said. “That was the first time I felt at home. That’s when I felt a sense of belonging.”

And this place as home may not end just yet. He’s considering getting his Masters in Education. What he’s learned is that he’s passionate about educating people and giving people the opportunities that come with education.

“It looks appealing and it speaks to me in so many ways,” Akuien said.

He hopes to return to Sudan as an educator. He hopes to make his country great.

His earliest memories are of being carried by a cousin with a group of refugees through thousands of miles of harsh wilderness and a homeland ravaged by war. He was only five years old at the time. They headed to Ethiopia only to find another civil war. His father was killed and four of his siblings met the same fate.

“That’s life in southern Sudan,” he said softly. “A lot of people didn’t make it.”

“Sometimes we don’t realize life is really, really horrible in parts of the world,” Akuien said. “I wish people made the best of what they have.”

The people are burnt into his conscious – the sadness and hopelessness on their faces, and the bodies. He was such a young child when he first left southern Sudan for Ethiopia. But the memories endure.

On the journey to Ethiopia and then to Kenya, it was all too common to see other refugees stop on the side of the dirt road and look down at a person lying on the ground. They would give words of encouragement to a still form that every passing moment seemed more lifeless. They would console each other at the loss of a person who had become family.

But staying put wasn’t an option.

“There was a sense of urgency,” Akuien said. “You had to always keep moving.”

Nick Miller ’10, anthropology major, and David Akuien ’10 talk during lunch. The two became friends while working together in Conferences and Events for the past three years.

It wasn’t just sickness that would kill, but also the people along the way. Maybe it was a bandit or soldier, whose side they were on wasn’t always easy to tell.“You might walk into the enemy,” he said. The faces he remembers most are those of the nearly 8,000 Lost Boys who didn’t make it to America. Certainly some of them are now dead, but there’s hope many have survived and one day he’ll see them again.

Being on the cusp of achieving so much for himself, in many ways those achievements are also for those people, those boys that are always on his mind.

After escaping Sudan, only to face the perils of war again in Ethiopia, he returned along with the rest of the displaced to Sudan, only to eventually make their way to the Kakuma Refugee Camp in Kenya. It’s a place nearly 100,000 refugees have called home. In Swahili the word Kakuma means “nowhere.”

Eventually, programs organized by the United Nations and the United States enabled some of the “Lost Boys” to be moved from Kakuma to America. “The Lost Boys of Sudan” earned their name from the story of Peter Pan – all of their parents were either killed or separated from them. These boys who had lived a harder life than most men, hurried to apply for relocation.

Getting to Kakuma was no easy feat and it hardly seemed a place where people could live. It’s a barren desert.

When the wind blew, the granules would be picked up and scattered. Clean water was scarce and meals of maize (corn flour) and beans were offered twice a day. During the summer, doing anything from 11 a.m. to 5 p.m. was near impossible, as the heat of the sun would roar down on the camp. There were few trees to provide sanctuary from the sun.

There were moments though where the boys, who were forced to grow-up so soon, became kids again.

In camp, the boys would gather around a soccer ball on a dirt field filled with rocks and no clear boundaries and just play. They’d play without shoes. The sand would coat the few clothes they had and the rocks would tear at their skin, causing wounds. But none of that mattered in those moments, Akuien said. They were getting a chance to play a game, to escape the confines of their existence.

“When you’d see them do that, you’d think these kids are tough,” he said. “Despite everything, a lot of kids live life with hope and happiness.”
Hope came in the form of a relocation program to the United States.

The process of getting to America included several rounds of interviews. Akuien remembers studying for each of them, asking others what the interviewers wanted to hear.

Each day a list would be placed on a building wall of the U.N. compound with names of those who had been chosen.

The boys would gather around the list asking and almost pleading, “Is my name there?”

The day Aukien saw his name he was filled with mixed feelings, after all he was only a 12 year-old boy and was going to be leaving everything he had known to be a part of a place he couldn’t explain or visualize. He didn’t know the fate of many of his family members and in camp he was without them.

It wasn’t until years later, in America, that he would reconnect with his mother.

“I felt I was giving up a lot of myself,” he said.

He lived in foster care in Tacoma for those first years. He went to Foss High School. Because everything was so unknown, it was difficult.

“It was just nerve racking,” he said. “Just finding a classroom was hard.”

In Kakuma, they’d have class in whatever shade was available, maybe in a structure of mud and grass or under a tree. Finding a classroom wasn’t the biggest adjustment though. He struggled to communicate and understand cultural differences.

He asked himself that first day of class, “How am I going to make it?”

Akuien has always found a way. He has made Tacoma and PLU home, but longs to open the door of the past in hopes for a bright future.

He misses the mother he hasn’t seen for what seems like a lifetime ago. Akuien hasn’t seen her face to face in more than a decade. She is back in southern Sudan, with his sister. Being with them, in one place, is an image he holds on to and he is eager for it to happen.

“It’s been on my mind since I first came to this country,” Akuien said. “I want to see how life is now.”

Even though Sudan was a place of many horrific memories, he misses his country. Today, southern Sudan is a nation in recovery. Many of the farms and fields were destroyed. Villages were burnt to the ground, but new growth is taking place. Progress is happening, he said. It was only a few years ago that phone service became readily available throughout the region. Since, he’s been able to talk to his mother.  A journey that’s taken him from Sudan to Ethiopia, back to Sudan, to Kenya, then to Tacoma, will take him back to Sudan, not to the horrors of the past, but rather the hope of the future.

“I’m not better,” he said, “but I guess I can say it’s the card I’ve been dealt and you just have to deal with the card you’ve been dealt.
“Nothing is bigger than what I’ve already been through.”