Around the world to find a calling

Around the world to find a calling

While waiting for a flight, a fellow passenger starts to make small talk with Najib Abbas.

The conversation starts with pleasantries, maybe they discuss the weather, but before long the fellow traveler will be telling Abbas about their life, about themselves – in great detail. 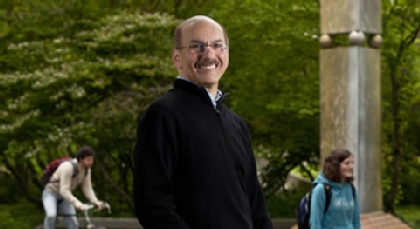 Najib Abbas is returning to his home in Saudi Arabia to be a marriage and family therapist. (Photo by John Froschauer)

“I’ve gone through that a thousand times,” Abbas said.

Maybe people just feel comfortable with him, but perhaps it’s something more.

People tend to talk in-depth about their lives with him, the 54-year-old said.

For most of his life he didn’t think much of these occurrences, but then a moment in his life changed his mind and led him to his passion.

“It’s my calling to be a therapist,” Abbas said.

“I’d been thinking about it more and more,” he said.

In Saudi Arabia, there are psychiatrists and psychologists, but marriage and family therapists aren’t widely available.

Then in 2005 while on holiday, he took the first step and traveled to Melbourne, Australia. He inquired about going to school there and they suggested he check out a therapy program in Auckland, New Zealand.

It was a giant leap for him, after all he hadn’t been in college for nearly 25 years and that was for a bachelor of science in information systems, his profession in Saudi Arabia.

“It’s quite a challenge,” Abbas said. “It’s all here, but it’s actually walking the walk.”

He took a five-month leave from his IT job and started classes in New Zealand. It was the right path for him. After completing pre-requisite courses, he returned to Saudi Arabia ready to take the next step and go back to New Zealand to complete the program. It would require quitting his job and taking a great leap of faith.

He would wait to make sure he was truly passionate about this new endeavor.

Then nearly nine months later, Abbas was on holiday in California and began searching for programs that would fit the kind of therapy he wanted to do. He discovered that MFT was what he was looking for. His intrigue garnered more traction.

After seeking advice and looking at schools he felt PLU and its MFT program was the best fit for him. Abbas applied and he visited the school. Actually the first person he met was David Ward, a professor in the MFT program. The guidance he would get from Ward and MFT Professor Charles York would prove incredibly valuable.

“I wouldn’t be here without them,” Abbas said. “And now two-and-a-half-years later I’m an MFT – I’ve graduated.

“It was a struggle in the beginning.”

There was an age gap with many of his fellow students and there were cultural differences too. And of course the program was academically rigorous.

But even with those challenges, maybe because of them, Abbas has developed not only reliable colleagues, but lifelong friendships.

“Najib is an outstanding person and therapist,” Ward said. “I have been extremely impressed with his resiliency and ability to connect with his clients and his colleagues. He will be sorely missed in the program.”

He recently finished an internship in West Seattle – at Navos. Being able to practice therapy showed Abbas that he had made the right decision. Like the guidance he received from the PLU MFT program faculty, the support from his Navos supervisor, Victor Place, enhanced his fire for MFT and helped set his path toward his passion.

Being able to help clients reach clarity or help guide them through the hardships of life has been very fulfilling. In many ways he’s learned as much if not more from them.

And so another chapter in his life begins as he returns home.

“He brought with him a true passion for helping others and I am very excited to see that passion be taken to Saudi Arabia,” Ward said. “There is no doubt that Najib will change the way mental health is viewed and offered there.”

In this part of the world, MFT is a new field.

“I’m going back to an interesting journey now,” Abbas said. “I don’t know why I keep doing this. I guess I like challenges.”

He’s not sure how he’ll be received in Saudi Arabia. But as long as he can help and support people – individuals, families and couples – in finding mental solutions to their problems, Abbas knows he’ll be doing what he’s meant to do.

“It’s an awesome experience,” he said. “This is my calling. This is truly something I want to do for the rest of my journey.”