They will give you a ride home too. New students coming to Pacific Lutheran University this fall might be thinking about classes, their roommates, their majors or just how did mom say to do the laundry again? 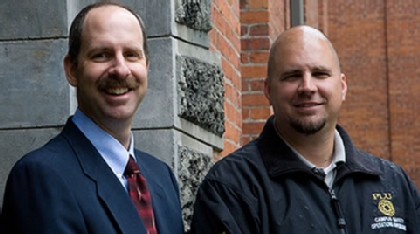 But Campus Safety Director Tony Berger is thinking about just one thing, this day, or any other for that matter – how to keep a community of up to 4,500 people – students, staff, faculty and visitors – safe.

After almost three years at PLU, Berger, 47, points with pride at a few features which makes the urban-suburban campus one of the safest in the region. There is an escort service available 24-7 to students who want a ride from anywhere on campus to their halls or nearby off campus housing.

“In all, I think we give about 26,000 rides a year,” Berger said in a rare quiet moment at the Campus Safety offices tucked underneath Harstad Hall. Which makes this service the most popular, he added.

A staff of nine full-time supervisors work with about 75 student workers to let staff and students in and out of buildings, check on disturbances and monitor the 47 cameras stationed around campus. They will respond  to the 20 emergency phones stationed strategically around the campus’ parking lots and walkways. If a student feels bothered by something, or someone, they can pick up the phone, and get an immediate response, Berger said.

The campus also has an emergency text message and speaker system, as well as e-mail alert, that will go out if there is a threat on or near campus, Berger said.

An extra safety feature at PLU is Berger himself. As far as anyone knows, PLU is the only campus in the nation that hires a full-time police officer, Berger, to in essence be the police chief of a small town. PLU contracts with the Pierce County Sheriff’s Department and pays the department for Berger’s position. As such, he has inside access to the workings of the office and how to report problems quickly and to the right person.

When two projectors were stolen from PLU’s multimedia lab last year, one of PLU multimedia employees noticed that two identical projectors appeared on eBay. Berger was able to work with local law enforcement offices to develop a sting operation on the home. Police officers, posing as interested buyers, arrested the pair that stole the projectors. Without Berger’s inside knowledge of the police department, it’s unlikely the case would have been solved.

Berger has more than 23 years in law enforcement experience and a bachelor’s degree in psychology from the University of Washington. He joined the Pierce County Sheriff’s Department in 1989, and has worked patrol duty, juvenile investigations, special assault and as the supervisor of crime analysis. Berger’s team was responsible for the creation of a Web site that lists were registered sex offenders live and another site that maps crime trends in various neighborhoods.

During the summer, things generally slow down a bit, although Berger and his staff remain on duty, regardless.  This fall, the efforts to keep the small city that is PLU, kicks into high gear again.

For more tips on public safety, check out the Campus Safety Web site.