Boats remain docked in Venice, La. as oil continues to gush from a ruptured BP oil well offshore in the Gulf Coast.

“I would love to talk to y’all, but my job is my number one priority,” one fisherman said to me when asked to comment on how the spill has affected him. “I want to tell you what I think, but this is my livelihood.” 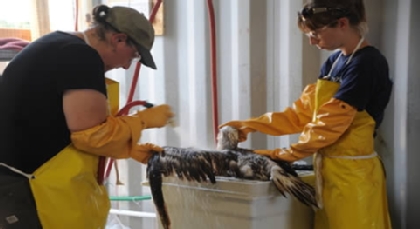 Oil seeping into the Gulf of Mexico has caused a wide-spread impact of the coast from environmental to economic. (Photo courtesy of the United States Coast Guard)

Narratives like this are common surrounding the clean-up efforts. Oil has damaged more than open waters within the past two months, since the April 20 explosion killed 11 men on the offshore rig and ignited the disaster.

During my short trip to Venice, I tried talking to a few fishermen who would not comment on camera about what they though about the spill. Many of them have lost work due to the environmental devastation and are currently contracted by BP to help with disaster relief. Their work contracts prohibit them from speaking about the issue.

There has been severe economic unrest in the region. Thirty percent of Louisiana waters have been closed to fishing, according to a USAToday.com article, and the economic loss to the region is projected at $11.5 billion.

According to the article, the New Orleans economy depends on the Gulf waters, and Louisiana Gov. Bobby Jindal is against the six-month moratorium on deep-water drilling, recently declared by President Obama. The halt of drilling could cost the state 20,000 jobs over a period of 18 months, according to USAToday.com.

Many people in Louisiana, despite the devastating effects this spill has had on their lives, don’t support a halt on drilling off the coast. Ninety percent of the nation’s offshore rigs are in Louisiana waters, and a halt on drilling means more jobs lost. With inevitable job losses already onset by the current devastation of this spill, a moratorium that ceases more labor is not in popular demand.

Editor’s note: Kari Plog was down in the Gulf Coast Region with the PLU MediaLab working on their documentary about oil production in North America.