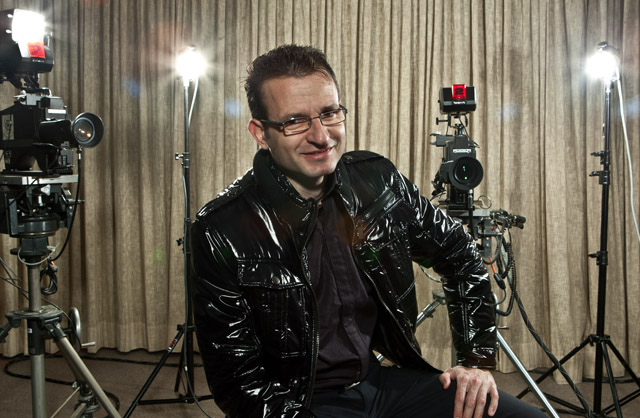 Hebrew Idol showcases a different view of the Bible, theology

According to Assistant Professor of Religion Antonios Finitsis, there’s one real advantage to teaching a religion course: Nobody really knows all it entails.

“They think religion is confined,” he said. “People do not expect religion to be so pervasive.”

Religion is too big to be isolated on the pages of books.

Case and point: Finitsis’ Religion 211 course, Religion and Literature of the Hebrew Bible. In this class, Finitsis asked his students to tell Hebrew Bible stories in whatever way they could. What he saw was “too good for no one else to see.”

With that, “Hebrew Idol” was born. As part of the class, the student videos are subject to a vote, with top selections advancing to an awards show. The show includes viewings of the top selections, guest judges portraying Hebrew Bible characters, awards, hall-of-fame inductions and musical performances.

It is hosted by Finitsis himself. Ryan Seacrest he’s not, but he’s no slouch, either. Before diving into academia, Finitsis was a MTV-VJ in his homeland of Greece.

Over the last three years, he’s seen students tell stories through the lens of reality shows, comedies, epics, dramas and a few creative surprises along the way. The only rule: Each presentation has to arrive at an opinion about a story. How they get there, however, is up to them.

Students aren’t the only ones who have embraced the project. Professors from across campus have joined the fun – many of them serving as costumed guest judges at the Hebrew Idol finale. Once, a chemistry prof actually showed up dressed as the Frog Plague of Egypt.

After three years, Hebrew Idol keeps getting bigger. Finitsis doesn’t know what will happen next, or how long the show will last, but as long as the students blow him away with the work they put into the videos, he’ll continue supporting the project.
“The best moment for me is when I sit back and they’re teaching me,” Finitsis said. “I do it because I believe in the videos, I believe in the student work.