PLU alum gets a ringside seat to history as U.S. plays in World Cup Last month

PLU alumna Kelsey (Dawson) Goodson, ’08, accompanied her husband and U.S. soccer player, Clarence Goodson IV, to South Africa to represent the U.S. team at the World Cup Although the team lost to Ghana on June 26, Kelsey noted it was great being at the World Cup, rooting for the U.S. and blowing those darn horns until you were blue in the face. She recently described her experiences in this e-mail interview. 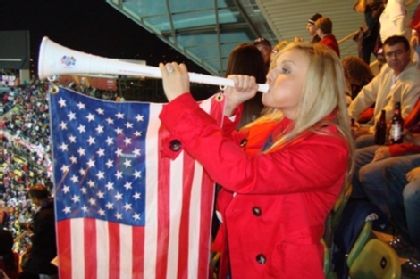 Describe what it was like being up in the stands for those games. Did everybody come in red, white and blue face paint? What was the strangest getup you saw?

About two hours prior to each match, over a hundred U.S. family members, staff and, of course, U.S. State Department security marched through the streets into our seats. The typical “uniform” for any given match was a classic American get-up – jeans, tennis shoes, and the jersey of our family member. Face paint with “USA” and the number of our special player were often worn on the cheeks of mothers and (wives)WAGS, but I have to say the men of our group stayed away from anything remotely resembling makeup.

As our troop of families made our way into each match, other U.S. fans would cheer us on, and opposing teams would often begin directing their cheers at us, always in good spirit.

The strangest US fan outfit I saw, was at the USA vs. Solvenia match. Three men wearing full body leotards and cowboy hats ran through the crowd before the match. One wore red, and the others white and blue. The leotards even covered their entire head and face.  I chased them down for a picture with another US family member. I imagine it was hot under there, but their dedication was appreciated and amazing.

How did everyone treat the teams and their families?

I cannot speak for how the team was treated outside of their hotel, but I can say that the Irene Lodge, where the team stayed, welcomed each US player, every staff member, and all coaching staff with open arms.

After every game, hotel staff would greet the team in song and dance outside the main entrance. The night the US Team advanced to the Sweet 16, US families surprised our boys at their hotel.

US families were wined and dined everyday by the very talented US soccer staff.

Everyday we had excursions throughout Joburg and the surrounding cities. Most days we didn’t even buy a meal because there were so many planned activities with provided drinks, snacks, and divine meals of the very best South African cuisine. The US State Department accompanied us on every outing and stayed with us in our hotel along with 24-hour South African official security, hotel security, and on game days, the South African police as well. When you feel safe, it is a lot easier to have fun.

From VIP dinners, pre-game barbeques with Drew Carey and US Ambassador to South Africa, safari’s, or simply visiting flea markets, we were treated royally.

What was the reaction down there when that goal finally came in on the match against Algeria (June 23)?

I cannot explain it, we were just cheering and holding our breath for that ball to find the back of the net. Every player, even those not on the field, fought hard. They fought as a team. When Landon Donovan finished what Clint Dempsey kicked, and the ball flew through the goal, a burst of energy surged through every US vein in that stadium.

The sound and vibrations echoing though the stands is something I will remember until the day I die. I think I may have been the only one with dry eyes in the whole US section. Mother’s were crying, brothers and fans put on their sunglasses in the night sky to cover tears of pride and joy streaming down their cheeks. The stands roared with screams for joy. We hugged, we kissed, we cried. We won.

My husband Clarence Goodson IV was on top of Donovan in the dog pile of players at the corner flag, and as the other players piled on top of them, the celebration continued. I grabbed my video camera and ran down to the bottom row and jumped onto the railing so I could get some height.

Once Clay saw me taping the celebration he came straight over to the edge of the field. I jumped off the railing, down onto the walkway, past security, and I jumped onto the wall between the field and stands. He hugged me tight, he gave me the biggest happiest kiss, and as media snapped pictures of our private celebration in the midst of thousands, I was quickly pulled back by my pants off the wall by security. I know they were doing their job, but I am a wife…I was just doing my job too.

The stands smelled of sweat, spilled beer, and tears. My ears rung from the constant cheers. Every US fan was beaming with pride and big tooth smiles. Most were singing and dancing their way out of the stadium. Of the 35, 287 fans at the match, two impressed me a lot. Two Algerian fans came up to some of us, shock our hands and said, “Fair play. good match.”

While we walked the streets back to the buses, Clay texted me, “I am having a beer with President Bill Clinton”.

Later Clay told me, I tapped his beer with mine and said, “Cheers Bill”. Players mentioned how down to earth and nice the former US President was. What an honor to meet him. What a night!

We here at PLU have been reading your blog. What are a few of the amazing things or sights you’ve seen down there?

One of the most amazing things I have seen while in South Africa is Soweto (South West Township) and the Apartheid Museum, in Johannesburg, South Africa.

At the museum we had a guide to share, historical facts, and personal stories, about being a black South African during apartheid. We watched movie clips of propaganda. We visited the solitary confinement cells similar to those that Nelson Mandela himself was held in.

We learned about how the prisoners stayed in a room small enough to touch the walls with both fingers, when standing in the middle. It was dark 24 hours a day for sometimes years, and they were all alone. Prisoner’s had two buckets and no blankets in the cells. One bucket for water, one for a toilet. Sometimes prisoners would get confused and drink out of the wrong bucket.

At the end of the museum we walked through a small room with rocks on both sides. We threw a rock from one side to the other, to symbolize throwing the past and all our worries and cares behind us. We choose to move into a bright future. With that I threw the rock, and walked into the beaming sunshine. How blessed I truly am.

Next, we boarded the buses and drove to Soweto, home to 2.5 million people. We ate a simple lunch in the nicest restaurant there. Even still, there were bars on the windows, no heating, cement floors, plastic chairs, and no finished ceiling above us. We enjoyed live song and dance in between our plastic chairs. Families drank bottled water and cokes with straws. Across the street from the restaurant is Nelson Mandela’s home with ex-wife Winnie. Bullet holes still leave scars of persecution in a tiny brick house.

While I South Africa I saw some of the best shopping centers; I toured on safari; I visited chimps at Jane Goodall’s Chimp Eden, and I ate the most delicious meals…but the best thing I did was see the real South Africa. The people, the homes, the intersections where every weekend 150 funerals processions drive through. This is the South Africa that is still growing, the South Africa we must not forget.

The weather in Cape Town was chilly and rainy, similar to fall in the Northwest. In Johannesburg, however, we had sunny days up to 70 degrees and the nights were chilling to the bone at or around freezing.

South African food is compiled of hundreds of variations. It is the rainbow country because of the diversity and multicultural heritages represented here. I have had delicious sushi, curries, pumpkin, bread, beats, and stews, but I have to say that my favorite is butternut squash. It is naturally sweeter to that we are accustomed to in the US without any added sugar.

What have you been doing since you left PLU? What’s your job now and where do you live?

My PLU graduation gift to myself was a trip to Norway. While on vacation I met Clay (Clarence Goodson IV). Although, we only spent mere hours together, the love sparks began flying and in six months we were married. Two and a half days after the wedding I moved to Kristiansand, Norway where Clay plays for IK Start in the Norwegian Top Division. I am currently working with the Red Cross and volunteering at our church in Kristiansand. On August 17 the Red Cross will host their first 5k run, “Run for Your Life” to raise awareness and funds to support the group I directly work with, children suffering and recovering from cancer.

While at PLU I majored in communications with an emphasis in public relations and advertising and a minor in Religion. At the Red Cross I also help to plan and coordinate fundraisers, promote events, and work as a liaison with media. Volunteering at our home church in Norway, I am coordinating a trip to Israel, and work with media. My education at PLU has been so helpful. It’s opened doors and helped me utilize my skill set in a new country.