This fall, there’s something new roaming the sidelines at PLU sports events.

It’s actually a bit of a blast from the past too. 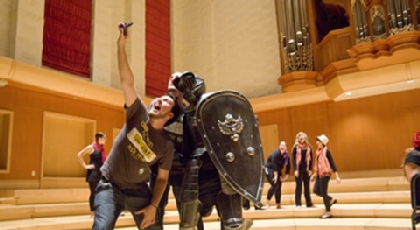 The Lutes were once called the Knights in the 1970s and 80s.

The teams now are still the Lutes, but the mascot is the Knight. The mascot will be part of the cheer squad and help rally Lutes in the stands to cheer on their fellow student athletes.

Plans are in works to give the gallant sideline character a name.  So keep an eye out for a “Name the Knight Contest” sometime this fall.

“It seems students are really excited about it and that’s a great thing,” said Laurie Turner, director of athletics. “It really helps in assisting and creating a home court advantage.”

Turner also pointed out that getting a mascot was an entirely student-driven initiative, which she thinks will help in creating a festive and entertaining PLU athletic event experience.

“Hopefully it will just add to the student experience,” she said.

This past spring, the Student Athlete Advisory Committee representatives began to discuss reasons to have a mascot and what that mascot would be. Students wanted to preserve the long-standing tradition of the Lutes of PLU, but also wanted a visual representation of a mascot to generate Lute spirit on campus and particularly at athletic events.

The students wanted to inspire spirit and pay homage to the past, said Jennifer Thomas, assistant athletics director advisor to PLU SAAC. That’s why they decided on the Knight.

More student groups joined in the discussion and the idea began to form, until it was approved by ASPLU at the end of last year.

The PLU Knight made its first appearance during Welcome Week on campus and was on the sidelines cheering on Lutes at the Sept. 18 football game against Cal Lutheran at Sparks Stadium in Puyallup.

Several students – men and women – will serve as the mascot and a PLU flag has been added to the Knight to wave at events.

Find out the latest about Lute athletics at GoLutes.com.