Working toward peace for 20 years

Earlier this month, the former ambassador of Norway saw part of that work come to fruition with a vote by the south Sudanese people to secede from the north and become an autonomous country. 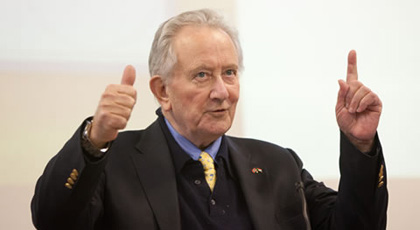 Thursday, Jan. 20 Vraalsen visited PLU to share his insight into this long process to students and faculty.

Vraalsen’s experience with Sudan makes him uniquely qualified to talk about a current world issue.  From 1998-2005 Vraalsen served as the UN Secretary-General’s Special Envoy for Humanitarian Affairs for the Sudan and following the peace accord in 2005, served as the chair of the Evaluation and Monitoring Commission that held the north and south together in the lead up to the referendum this month.

Having been involved with the peace process in Sudan for decades, Vraalsen began by saying this vote, although significant, is not the end of peace efforts.

“Don’t be wrong about this, it’s one station along the road,” Vraalsen said. “It’s not yet there.”

Fighting between the ruling government and the Sudan People’s Liberation Army, and other militia factions, has ravaged the Sudan with war for the last 20 years.

And throughout the last two decades, Vraalsen worked with the warring parties, which resulted in the Comprehensive Peace Agreement in 2005, which included the requirement for a vote of southern independence by 2011.

Getting to a peace agreement took an untold number of  meetings, each inching toward this month’s vote.

“The parties were simply not ready to talk peace,” Vraalsen said. “So, they worked to fight on for awhile.”

Vraalsen thinks what finally brought the parties together was the realization that the war was unwinnable militarily. There are many issues to resolve, but a willingness to talk and work together was the only option for peace in Sudan.

“If the parties are not ready or not willing than there’s nothing that can be done,” Vraalsen said.

There’s hope for success in Sudan, Vraalsen said. He was in Sudan during the vote to split Sudan into two countries – a northern nation and a southern nation.

“So it’s a solid mandate for the southern leadership,” he said.

And the voting itself was relatively quiet of violence, despite earlier predictions to the contrary.

“It went very smoothly,” Vraalsen said, with nearly 2,600 polling stations around the country and a police force of 5,000 present to keep the peace.

“Within four months they did this,” he said. “They deserve a lot of praise in this.”

By July 9, when the CPA expires, the north and south must figure out how to address issues of dividing wealth (and debt), providing security and sorting out citizenship.

The north has been heavily dependent on southern oil reserves and the functionality of its economy is directly linked to the south.

With so much yet to accomplish for stability in the region, there is still skepticism about the viability of  a Sudan that is now two independent nations, Vraalsen said.

“They are people who, up until now, have shown they are masters in their own house,” he said.

Peace in Sudan can be the gateway to peace in places like Somalia and the rest of the region, Vraalsen said.

“If there’s peace in Sudan, that will help peace in the rest of those countries,” he said. “It’ll be interesting to see what will happen.”