Their faces stare out from yellowed passport photos.

Some of carrying suitcases.

Many are only holding their younger siblings or nothing at all. 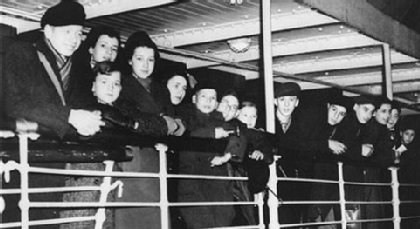 This photo is of the first transport from Berlin as it embarks at the Hook of Holland, December 1, 1938. (United States Holocaust Memorial Museum)

These are the children of the Kindertransport of 70 years ago, when a hodgepodge of  English social service groups, Quakers and UK-based Jewish groups coalesced in a desperate, and successful attempt to rescue Jewish children from Germany, Austria, Czechoslovakia and Poland. And it was this rescue of 10,000 children between 1938 and 1940 that caught Laura Brade’s ’08, interest and imagination as she pondered the focus of her master’s thesis at Chapel Hill.

Specifically, Brade, who is studying under Professor Chris Browning – a former history professor at PLU and currently the Frank Porter Graham Professor of History at the University of North Carolina in Chapel Hill – wanted to research and contrast the experience of the children from Czechoslovakia with those children with an Austrian background.

She will give a report on this topic at the Fourth Annual Powell-Heller Holocaust Conference at PLU in March.

“I was surprised that after checking the testimonies, the Austrian children experienced greater prejudice than those from eastern Europe and the Slavic countries,” said Brade, 25, in an interview from Chapel Hill last month.

In fact, in reading the written testimonies, few if any of the Czech children had anything bad to say about their British hosts. But the stories from the Austrian children were quite different.

“My argument was that the nation of origin made a difference in how the children viewed and were treated in exile,” Brade said.

The first transport of 196 children came after Kristallnacht on Nov. 9 and 10 in 1938, when the outbreak of violence by the Nazi party began in German and Austria against the Jewish community. The transports of the children, without their parents, continued until late 1939, when England entered WWII.

In her research, she found, for example, that all male children from Austria and Germany, even though they were Jewish, were considered enemy aliens. Some were even deported back to the countries from where they had just fled.

Whereas many of the Czech children returned home to their countries or origin, many of the Austrian children did not go back, but instead emigrated to the U.S., Australia or settled in the UK.

“Most did not go back,” Brade said of the Austrian children. “They felt disowned by their country. Many spoke of when German troops came marching into Vienna, and how neighbors, who had been nice the day before, suddenly came out and supported the Nazis.”

“They did not want to be identified with being Austrian any more after witnessing that.”

Regardless of their nationality, most of the children never saw their parents again.

Brade first became interested in this subject while working on her capstone (senior) projects at PLU. In her research she came across a book written by a Kindertransport survivor. After eventually finishing up her masters, Brade plans to continue into doctorate study at Chapel Hill. And after that?

“Teaching history,” she laughed. “And I’d really  like to do it at PLU.”