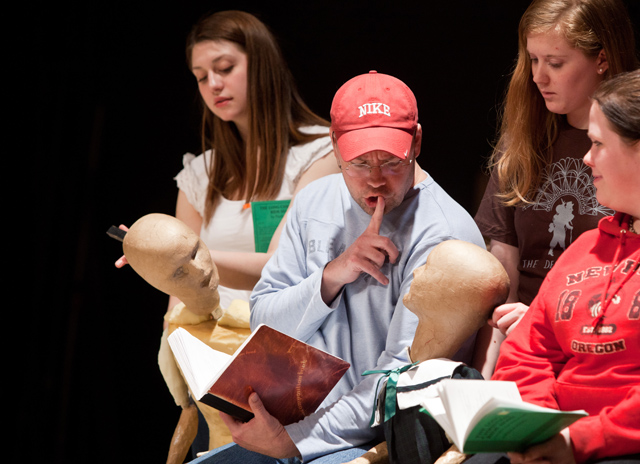 Actors practiced the art of Bunraku puppetry to express Paula Vogle’s play, “The Long Christmas Ride Home.” Pictured here are David Ellis ’11 and Abigal Pishaw ’12, who play the parents in the play. (Photo by John Froschauer)

Most of us have this childhood memory – sometimes cherished, sometimes tucked away under lock and key – of the family road trip.

The miseries of sitting in the back seat with the annoying brother or the arrogant sister, and if things are really bad, having a middle sibling wedged in between.

The latter usually threatening to barf or fart their way cross country.

This is the setting of Paula Vogel’s one-act play “The Long Christmas Ride Home,” which will be performed along with two other plays by Thornton Wilder – “The Happy Journey to Trenton and Camden” and “The Wreck on the Five-Twenty-Five.”

All three plays are adapted and directed by assistant professor of theater Brian Desmond, who watched last month as the cast did a run-through of Vogel’s play, using Bunraku puppets to portray the young children in the back seat of the car, while the adults in the front seat were played by the actors themselves. As the play progresses, the actors playing the children take over their roles from the puppets. Then as adults, and a ghost,  they consider the implications of that long holiday car ride.

“You’ll see the dramatic and traumatic effects of this car ride later in their lives,” Desmond said. In fact one of the children introduces the play, somewhat like the stage manager in “Our Town,” as a ghost.

During a rehearsal last month, the puppets looked like paper mache crash dummies. But once the curtain rises March 10th, the puppets’ faces will have been molded to resemble their human counterparts, and they will be dressed in clothing that will mirror what the actors will wear later in the play.

Vogel pays homage to Wilder, through the space setting and tone of the 90-minute play, Desmond said. This adaptation combines elements of Japanese Noh (pronounced “no”) theater and Bunraku puppetry, where actors work the puppets while dressed in black body stockings.

Kate Howland, ’12, noted it was hard to express emotion through the puppets. Howland will play 12-year-old Rebecca and then her 30-something adult self in the play.

“I really didn’t expect the puppets to be this big,” she said, as she carefully folded the three-foot long puppet on her lap during a break in rehearsal.

Jack Sorensen, ’13, plays Stephen, who is a ghost, then nine years old, and then his adult self as the play ends.  Jill Heinecke, ’13, plays the youngest, 7-year-old Claire, at the beginning of the play.

PLU student Jordan Beck ’12 has also composed music for the production and also serves as musical director for all the plays. Beck’s composition will be played on an instrument called a samisen, a banjo-like instrument that is the traditional instrument of choice to accompany Banraku puppetry in Japan.

The three, one-act plays will be performed from March 10-20 at the Eastvold Auditorium.