In its fourth season, Antonios Finitsis says the show just keeps on growing. 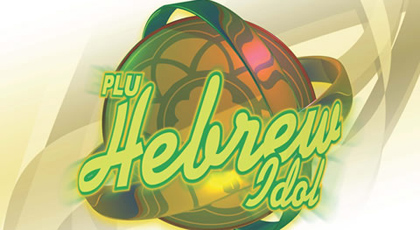 PLU’s Hebrew Idol is in its fourth year. This year’s finalists are “Absalom: True Confessions,” “Samson: With a Hero like this Who Needs Villians?,” and “Jephthah’s Daughter.”

“I kept thinking I had to be more intentional about it,” he said.

He wanted the logo to incorporate a few PLU specific elements. First, rather than the American Idol-esque purple they went with gold, and then green to highlight the Green Dot campaign that PLU is participating in and finally the Rose Window, which was recently refurbished and installed.

Hebrew Idol is a video project for Religion 211 – Religion and Literature in the Hebrew Bible. Students produce their own interpretations of biblical stories, putting anything from a comedic, dramatic and/or contemporary take on the story telling.

Finitsis narrows down the submitted projects to 12 and opens it to online voting by students and staff. Voting ended April 7 and the finale will be held April 14, which awards the Hebrew Idol crown from among the top three vote getters.

He chose Green Dot to identify with, which brings to light speaking out against domestic violence, because all the videos in some way address relationships.

Finitsis said, branding that identity needed to happen because it really is unique to PLU. He isn’t sure if it could happen anywhere else. Actually, he doubts it.

“It happened because the way we teach religion,” he said. “We don’t want it to be abstract. We want it to be real in people’s lives.”

Without the support of faculty and staff, the video project would never have happened, Finitsis said.

And it certainly wouldn’t have become what it is today without the creative ability and passion students bring to the videos, he said.

“We have to be proud,” Finitsis said. “We should claim it. It’s our own work and it works here.”

The PLU Idol Finale takes place at 6 p.m., starting with a Red Carpet appearance of contestants, guest judges and Finitsis as host. Then a screening of the final three videos will follow, along with special award show entertainment.

This year’s top three videos are Absalom: True Confessions, Samson: With a Hero like this Who Needs Villians?, and Jephthah’s Daughter.

The celebrity guest judges will be The Rainbow, Archangel Michael, The Queen of Sheba, and the Necromancer of Endor.