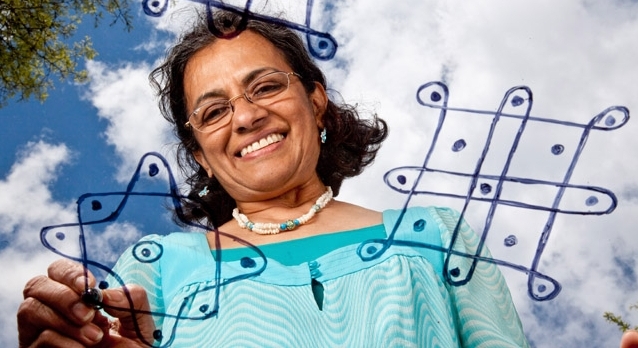 PLU Associate Professor Vidya Thirumurthy draws a kolam, an artful design that Hindu households use to communicate with their community. (Photo by John Froschauer)

Connecting the dots: Letting neighbors know “all is well” with the world

Each morning, on the doorstop of every home in Vidya Thirumurthy’s hometown of Chennai – indeed, in much of Southern India – women and girls create what’s known as a kolam out of rice flour.

An intricate geometric pattern based on a series of dots, a kolam is an artful design that Hindu households use to communicate with their community: If there is a kolam on the doorstep, then all is well inside; if there is not, then neighbors know that all is not well.

Thirumurthy, associate professor of Instructional Development and Leadership, remembers the days when she and her sisters would spend considerable time designing their family’s kolam – in a gentle spirit of competition, they would view their neighbor’s designs and, each day, endeavor to design something more elaborate, more beautiful.

Thirumurthy uses the kolam to describe something else – something for which she earned a prestigious Fulbright U.S. Scholar Program grant to study in her native India.

She uses the kolam to describe what is called “funds of knowledge” – the idea that children, especially young girls, gain knowledge not simply in the classroom, but through their family and their culture. In the case of the kolam, children learn not just a Hindu tradition, but they learn simple mathematical concepts, and spatial orientation and relationships through their daily creations. Children will unknowingly take those concepts they learned on their doorstep and use them, later, in the classroom.

“At the time, I never thought much about it,” Thirumurthy said. “But there is probably a relationship between designing kolams and mathematical concepts.”

When Thirumurthy returns to southeast India this fall, she will be looking for other instances of funds of knowledge, particularly as they relate to early childhood education in the Muslim community. When she took a group of PLU education students to India last J-Term to visit schools, she realized she knew very little about the cultural practices in Muslim community schools. It made her wonder – what are the learning practices that south Indian Muslim children bring from home that might facilitate learning later in the classroom? And how could those cultural practices inform what is later taught in the classroom?

“Children come [to school] with a whole lot of socio-cultural processes when it comes to learning,” Thirumurthy said. “So we need to find out how teachers can connect new knowledge to their cultural practices and how it informs curriculum.”

Beginning in October 2011, Thirumurthy used her Fulbright grant to find out. Over seven months, she met with students and families in the Muslim and Hindu communities in Chennai, as well as observe the rituals and cultural practices of the children in their homes and communities. In the end, gathered her findings and reported back to the schools in hope of helping them develop a curriculum that takes advantage of these funds of knowledge.

“If I know more about their culture, then the better I can connect with them,” she said. “Learning for those children becomes a little bit easier.”

In many ways, Thirumurthy’s studies are a slice of something in which she’s invested her entire career: understanding and exploring other cultures.

It is one of the big reasons why she enjoys taking students to India as part of her J-Term course “Comparative Education in India.” Some of the students who took part in the J-Term course in the past years have become, or will someday, be teaching in the classroom. And every opportunity to be exposed to different cultural practices can help make students better teachers.

“It changes their perception of the world,” she said.

And that’s a good thing. As a teacher, she’s also the first to admit it isn’t just her students that see a positive benefit from their travels to her home country. She does too.

“I see India differently because of them,” she said. “They help me understand Indian culture.”