When an anonymous donor committed to give PLU $1 million to endow a Professorship in Lutheran Studies, followed by other donations to put the endowment to chair status at $2 million in gifts,  it was more than simply establishing another chair on the PLU campus. 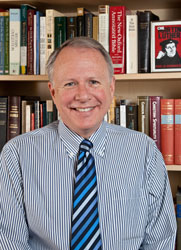 With this chair, PLU reached yet another level of distinction by which it sets itself apart from other universities. In the words of Samuel Torvend ’73, “it puts into clearer relief the distinctiveness of Lutheran education in the competitive market.”

After a short pause, Torvend added, “After all, the distinctive part of PLU is its middle name.”  With this chair, PLU reached yet another level of distinction by which it sets itself apart from other universities. In the words of Samuel Torvend ’73, “it puts into clearer relief the distinctiveness of Lutheran education in the competitive market.”

After a short pause, Torvend added, “After all, the distinctive part of PLU is its middle name.”

Torvend is in a unique place to understand that distinction, as he is the first holder of the new Chair in Lutheran Studies. He is a 1973 graduate in history from PLU. He also received his masters in divinity, his masters in theology and, ultimately, his Ph.D. in historical theology. He returned to PLU in 1998, serving as a professor of the history of Christianity. And since 2007, he has also been director of the university’s innovative Wild Hope Project. In accepting the chair position, Torvend will relinquish his post as Director of the Wild Hope Project. Torvend has also published on Lutheran colleges as centers of social reform, Lutheran commitments to education and social welfare, and the intellectual sources of social ethics in Lutheran higher education.

“Lutheran higher education looks different than what you get at, for example, the University of Washington,” he mused. “At both places you can ‘follow your bliss,’ but here it is linked to things that are fundamental to who, as a university, we are.”

He points to PLU’s mission statement, using its environmental language as an example – though he notes that any portion of it would be relevant. “When we talk about ‘care for the earth,’ it is linked to who we are as a university” Torvend said. “There is a moral and ethical connection [to such ideas] because of our middle name.”

With the chair comes a certain level of cachet in academic circles. For instance, having an endowed Lutheran professorship will increase PLU’s reputation as a leader among Lutheran universities. Torvend is now collaborating with an international consortium of scholars working on economic, political and social reforms to be presented and published at the 500th anniversary of the Reformation in 2017. Thus, PLU will be the only Lutheran college or university in North America represented in that international consortium. The chair also provides other opportunities for him to consult, lecture and publish on the role of Lutheran higher education in linking academic study and ethical commitments.

In addition, income from the endowment will fund a yearly Lutheran Studies Conference at PLU, the first of which took place last September.

All that is great for the university. But Torvend speaks even more enthusiastically about what the chair will mean for the students, faculty and staff of PLU. He likes to talk about placing the Lutheran tradition in a “21st century context.”

“I see the professorship as a way of promoting the intellectual gifts of Lutheran higher education among a diverse faculty and student body who may or may not have a connection to the Lutheran tradition,” he said. “That is part of the challenge of being a Lutheran center of learning in the Pacific Northwest.”