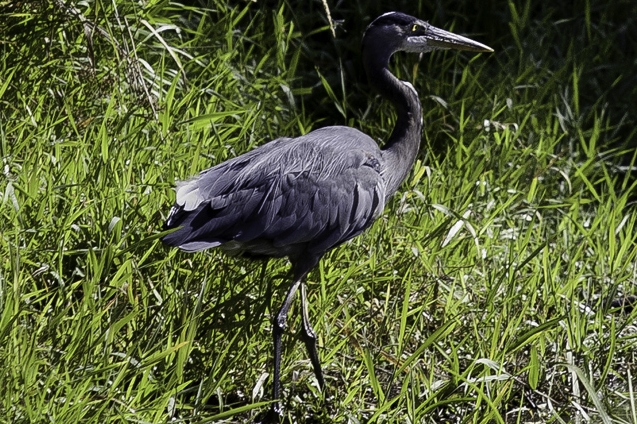 A blue heron ignores student paparazzi and continues to look for a midmorning snack at Northwest Trek.

The sights, sounds, and even smells of local wildlife helped first-year students bond and get to know one another on an excursion to Northwest Trek Wildlife Park near Eatonville on Saturday.

The group of 46 students, staff and faculty started the day with a tram tour of the park’s free roaming area where they saw animals in all aspects of their natural lives. The early-morning ride, while a bit chilly, brought a close encounter with every animal in this area of the park, including deer, geese, bighorn sheep, mountain goats, moose, bison and a blue heron. Some of the animals, like the sheep, were spotted laying in an open meadow a few yards away, while others, like a shaggy mountain goat were almost close enough to touch from the tram. For many, this was their first time at the park, but even some Northwest natives chose to come on this trip.

As the guide explained, different animals can be seen on the tour during different times of the year. This time of year, animals can typically be seen preparing for the breeding season – where elk bugle for mates and big horn sheep literally bang heads.

Saturday, though, the group got an unexpected treat. They oohed and awed over a small, five-day-old  bison – sporting strawberry blonde fur, as opposed to mom’s dark brown hide -exploring the woodlands with its mother.

Chelsea Waddell, a transfer student from Salt Lake City was amazed by the sheer size of an adult bison – which can weigh up to a ton and run 40 mph – they spotted later on the tour, resting just a few feet from the tram’s track.

“His nose is huge!”  Waddell said.

Like other non-Northwest natives, Waddell’s experience with Northwest wildlife was limited.

“I’ve pretty much only seen deer,” she said..

But for first-year Ramy Carter, the deer were his favorite part despite the number of times he has seen them.

“They seem the sweetest,” Carter said. “It was really cool seeing them up close.”

After the tram ride, students broke off into smaller groups for self-guided walking tours of the park’s nature trails, before heading back to PLU after lunch. Carter stuck with fellow first-year Sean Roper, who he met earlier this year on an overnight stay at PLU.  Both headed off to see their favorite animals, the elusive wolf and cougar.

“I saw a lot of stuff I’ve never seen before,” Roper said of the trip.

Northwest Trek was one of 25 “On the Road” trips to get first-years off-campus and acquainted with other new students, faculty, staff, and student leaders.

Other activities included volunteering with Northwest Harvest, salsa dancing, spelunking at the Ape Caves, lava tubes near Mt. Saint Helens, and hiking at Mt. Rainier. Each was led by a different group of faculty, staff and student leaders.

Campus Pastor Nancy Connor, one of the staff guiding the Northwest Trek trip, said Campus Ministry has sponsored this trip for the last six or seven years.