‘There are no excuses’ 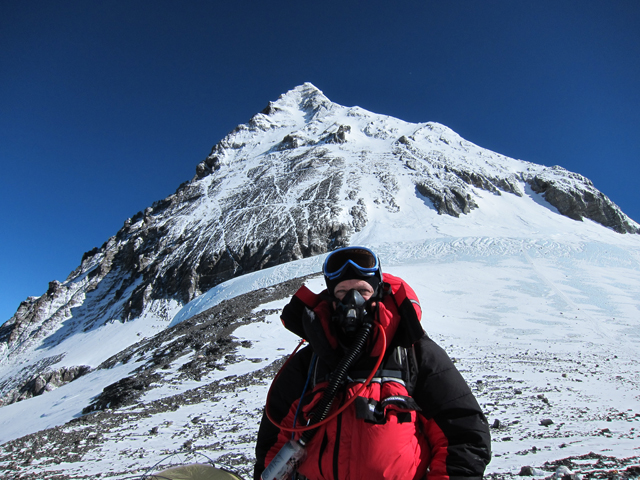 Last May, Gary Nelson ’81 summited Mt. Everest. He has reached the top of the highest peaks on five of the seven continents.

‘There are no excuses’

The way Gary Nelson ’81 tells it, when ascending to the summit of some of the highest peaks in the world there is a moment of realization.

The risk has been taken, the challenges faced. Now something new washes over the climber as what sets in his mind isn’t the depleted oxygen, forceful winds or even the stunning view across a never-ending traverse, but rather the uplifting feeling of completion.

“You know with almost every mountain I’ve climbed there’s a certain point when you start getting close, it’s hard to explain, but you know you are going to make it,” Nelson said.

“It’s kind of a strange experience,” he said. “There are no excuses. I’ve eliminated my excuses. Then you look around and go ‘what’s next?’”

Last May, Nelson summited Mt. Everest. He has now summited the highest peaks on five of the seven continents.  Kilimanjaro in Africa, Aconcagua in South America, Denali in North America, Elbrus in Europe and now Everest in Asia. Reaching the highest peaks in the world has cultivated an attitude that anything is possible.

“People often ask me ‘Why do you climb?,’” he said, “the answer, I think, is actually simple. I climb these mountains because it reminds me I can do things I think I may not be able to do.” 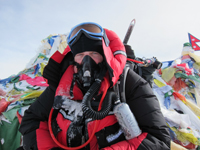 Gary Nelson stands in front of a prayer flag monument on Mt. Everest.

“When I first started, there’s no way I thought I could climb Mt. Everest,” Nelson said. “Now I’ve done that.”His adventures into mountain climbing began years ago. The California attorney would hike around the foothills and mountains near Los Angeles with his children.

“We climbed everything around here,” he said. “So we started climbing bigger things.”
The mountains to conquer kept getting bigger, including Mt. Rainier in Washington.

“Up in the Pacific Northwest, Mt. Rainier is one of the best play grounds anywhere,” Nelson said.

Climbing eventually became his own adventure to face and it’s brought him around the world to the doorways of the heavens. He’s reached the summit of the five peaks he’s attempted without being turned back.

“There are many ways to not get to the top,” Nelson said. “There are relatively few ways to get there.”

The perspective of what it meant to summit Everest sunk-in with Nelson, when he and his wife, Sherrie (Lahn) ’82, were asked, “How many people have climbed Mt. Everest?”

“Before I could come out with an answer she simple said, ‘Not very many,’” Nelson said. “I thought that was a good answer.”

Timing and luck played a big part in his summit experience. It was a relatively clear when they reached the top, he said.

“When I was up there, I don’t remember the wind blowing,” he said. Winds of 60 miles per hour or more are commonplace at that altitude – nearly 30,000 feet.

“It wasn’t blowing hard enough to get my attention. That just tells me it was a good day.”

Only a few hours before and after the ascent, the conditions had turned back other parties.

“What was funny with our group this last season,” Nelson said, “is that everyone made it to the top and that hasn’t happened in 15 years.”

By no means, did that mean the journey was easy.

“Everyone had to overcome something,” he said.

Nelson, himself had a mild case of pulmonary edema he had to overcome. It can be fatal, if not taken care of properly. He listened to the doctors and treated it by dropping altitudes and taking the proper pharmaceuticals.

“They have doctors up there,” Nelson said. “They green lighted me and there I went.”

“It can be a big danger if you come down with that because you can’t really move,” he said. “I guess I took a risk by doing that, but it didn’t feel like that at the time.

“There was time when I didn’t even know I was going to get a summit window and that was hard to deal with, but things worked out. I put it down as getting lucky again.”

Luck, may be a common theme, he said.

He recalled how earlier in ascent preparations, his group had been climbing on the Khumbu Icefall, near base camp. It’s part of a glacier off a cliff that breaks off into ‘giant ice balls.’

“Ironically,” he said, “It can be incredibly hot.  I’ve been hiking around the deserts of Palm Springs where it’s been cooler.”

So, as they climbed, Nelson had stripped down to base layers.

“A buddy in front of me was bundled up and had to stop and unclip to disrobe,” he said.

The group was clipped onto one another as a precaution from stepping off path into a hidden crevasse.  After his friend had layered down, he clipped back on and continued.

As Nelson passed where his friend moments before had been unclipped, he slipped off path and the snow underneath him cracked open and collapsed.

But because he was clipped in, he didn’t found out where the bottom was.

“There’s no doubt that one step off he would have died,” Nelson said, of his friend. “To me that was the scariest moment.”

Some people aren’t so lucky, he said.

“People die every year on that mountain,” Nelson said. “People don’t like to think about it, but it’s very real.”

There was one guy in a different group, he met and knew well enough to joke around with. When his group was leaving base camp one day, he saw a mass of guides and medical personnel grouped around a body.

“You just knew immediately something bad had happened,” he said. “And I looked over there and there he is dead. It’s very sobering. That was very sad.”

But while on the mountain, death wasn’t what he was thinking about.

“I took the attitude of most people,” Nelson said. “It’s not going to happen to me.”

Establish a rhythm, follow the guides and pay attention or getting to the top and back alive may not happen, he said. And of course a little luck never hurts.

The journey to the top is only about a third of the adventure, he said. It was two weeks from when he left Los Angeles to when he left base camp to ascend Everest, and five days after that he was on top of the tallest mountain in the world.

“The funny thing is, once you get there it’s like any other mountain you’ve been on,” he said. “But each mountain is its own adventure.”