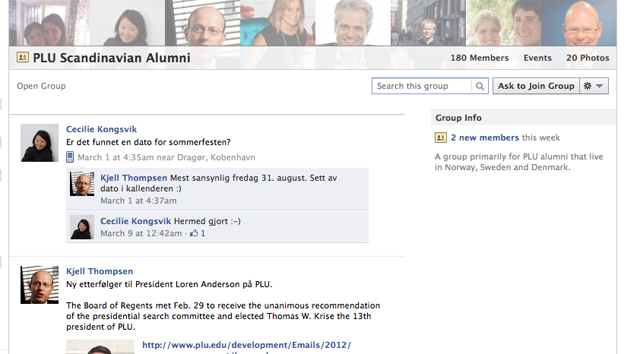 Facebook helps Scandinavian alumni stay in touch and up-to-date on all things PLU.

Facebook is opening the door for PLU alumni from around the world to keep in contact with each other and their alma mater.

“It’s a great vehicle to stay in touch,” said Kjell Thompsen ‘ 94, ’97, president of the PLU Scandinavian Alumni group. “I think it’s very important for alumni to stay in touch.”

Both professionally and personally there are so many networks people have that keep them connected and being a PLU alum is one of those connecting points.

“You already have something in common,” Thompsen said, “you’re already on the inside.”

The PLU Scandinavian Alumni group has an active presence on Facebook with 180 members and growing. They sponsor two annuals events in Norway each year and keeping track of what’s going on, with the group and with PLU,  is as easy as logging on to Facebook and Liking the group’s page . They have an annual meeting, which PLU faculty and administrators regularly present at and they also have a get-together that is much less formal and fun time of fellowship.

Thompsen said the alumni presence in Norway alone continues the strong tie the university has to the region. The alumni group not only gives Scandinavian alums the opportunity to stay connected, but also give back to their university, he said. The partnership helps connect new potential PLU students with PLU alums who are native to their country.

The network of Scandinavian alums doesn’t seem to be slowing down and social media is helping keep the momentum growing, while making it easy to stay in touch.