The Board of Regents met Feb. 29 to receive the unanimous recommendation of the presidential search committee and elected Thomas W. Krise the 13th president of PLU.

“His experience, his proven leadership ability and his understanding of the values and aspirations of the university make Thomas Krise a perfect fit with PLU,” said Bruce Bjerke ’72, chair of the Board of Regents. 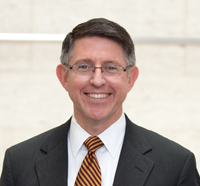 Thomas W. Krise has been named the 13th president of PLU. He will arrive in June to assume the presidency.

“I know the campus community will quickly embrace President Krise as we work together to meet the challenges and the great opportunities of the decade ahead,” Bjerke said.

He is married to Patricia Love Krise, a Fortune-50 manager and executive currently with the Ford Motor Company. They live in Stockton, Calif.

“Patty and I are delighted and humbled to be tapped for this important journey,” Krise said.

“We were both struck by the spirited sense of mission at PLU, as well as the strong sense of connection and vocation among the students, professional staff, faculty, regents, and alumni,” he said. “The bonds to the Lutheran community as well as to the local and regional communities are a source of great strength.”

Krise is a member of the Episcopal Church that is in full communion with the Evangelical Lutheran Church in America (ELCA). Search committee members remarked that Krise demonstrated a keen understanding of the Lutheran tradition of higher education and PLU’s mission and values within that tradition.

“Loren and MaryAnn Anderson leave behind a magnificent legacy and big shoes to fill,” Krise said. “But, as my late father liked to say, ‘All things are possible with a great team.’ Pacific Lutheran University is clearly a great team and it’s the chance of a lifetime to be chosen to guide the university into a vibrant future.”

Krise’s academic interests focus on early Caribbean, early American, and 17th- and 18th-century British literature. He has served as General Editor of the McNair Papers monograph series and Managing Editor of War, Literature, and the Arts: An International Journal of the Humanities. He has published numerous articles and other works, including Caribbeana: An Anthology of English Literature of the West Indies, 1657-1777 (University of Chicago Press).

Krise will arrive at PLU in June to assume the presidency. He succeeds Loren J. Anderson who will leave PLU in May, after 20 years at the university.