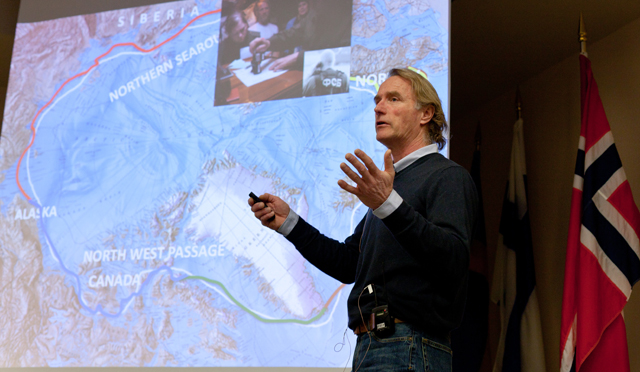 Changes in the Arctic have become increasingly visible, according to Norwegian explorer Thorleif Thorleifsson, who, with BØrge Ousland, became the first to sail around the Arctic in one, short season in 2010.

“These are the facts,” Thorleifsson said. “This is happening.”

The Scandinavian Cultural Center set the stage for Thorleifsson and Marit Archer Saether, an environmental counselor with the Norwegian Embassy, to lead a discussion on arctic exploration, climate change and its effect on the global strategic environment on Friday, March 2.

“The melting of the arctic accelerates global warming,” Saether said. “We need to act and we have known this for quite some time.

“I believe personally that this is caused by human activity,” Thorleifsson said. “I think everyone should decide why this is happening. This is my goal. Be curious. Find out for yourself.”

In his lecture presentation entitled, “A Voyage Around the North Pole: Modern Exploration and Climate Change,” Thorleifsson recalled his 80 day journey around the Arctic with photos and video clips.

Thorleifsson and Ousland’s voyage took them though the Northern Sea route in Russia, the Northwest Passage in Canada and across the North Atlantic back to Norway. It was a race against time and in waters with drifting ice, increasing darkness and autumn gales.

“We have to analyze challenges thoroughly,” Thorleifsson said. “My friend BØrge has survived all these expeditions because he is a pessimist.”

Thorleifsson said he hopes his work will bring awareness to the issue of global warming.

“I hope that the companies and actors in the future will be responsible,” Thorleifsson said. “It’s one small ocean up there and we are sharing it.”

“We find it crucial to protect the climate conditions,” Saether said. “We need a great innovation, great entrepreneurship and a great will.”

Retired physical oceanographer Carol Helene Pease and her husband, Bruce Rummel, both of Seattle, were among those who turned out for the lecture Friday afternoon.

“We’re sailors, so we enjoyed the talk about the actual sailing,” Pease said. “Sailing in those large swells is not an easy task.”

Pease could relate to Thorleifsson’s journey, to some degree, because her work for the U.S. and Norwegian governments took her to 80 degrees north in both the Atlantic and Pacific oceans.

“The changes since I was there last are just remarkable,” Pease said. “There’s probably about 50 percent loss since I started my career.”