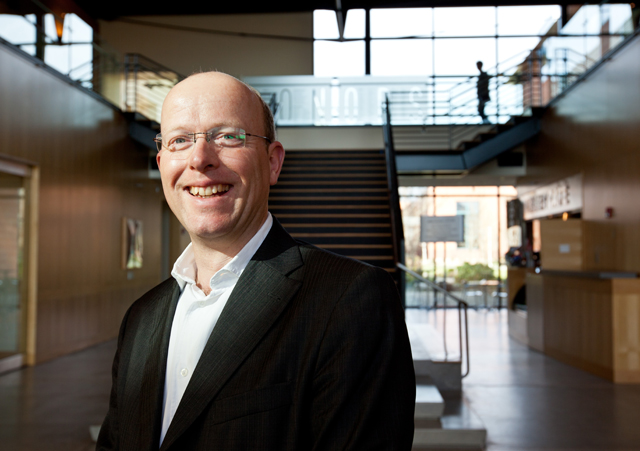 Kjell Thompsen, Jr. ’94, ’97 is the president of the PLU Scandinavian Alumni group. The group is active in keeping Scandinavian’s connected with PLU. (Photo by John Froschauer)

As an MBA student Kjell Thompsen, Jr. happened to sit right in front of his future wife – Isabelle (Juillard) ’96.

“It was tough on my neck,” Thompsen joked because he was constantly looking behind him to steal a glimpse of her.

It’s just one of the connections Thompsen ’94, ’97 made as a Norwegian while attending Pacific Lutheran University.

Thompsen has more than 16 years of experience working internationally within sales, marketing and product management. After graduating from PLU, he managed Natilus Publishing in Seattle and returned to Norway in 2000. Currently, he is the head of Bid Management and Sales Support for Intelecom Group out of Norway. Thompsen and his wife have three children.

To some extent, it was by chance that he came to the Pacific Northwest. Thompsen had been finishing a two-year program at a business college in Norway and was ready to go on to a university. First, he made his way to a university in New Orleans. A semester later, he was ready to move on. Classes where hundreds of students packed a lecture hall to be taught by teaching assistants, not professors, was disappointing to say the least, Thompsen recalled.

By chance, he had a friend attending PLU. It became apparent to him early on  that it might just be the right fit for him – specifically considering the prestige of PLU’s School of Business. Plus it didn’t hurt that he’d actually get to interact with the faculty.

“The relationships with the professors is close, there’s access and availability,” Thompsen said. “You don’t see that happen everywhere.”

Thompsen was an international student, but the school had, and has maintained an international feel, he said. It’s not just about students from around the world attending the school, but also that so many PLU students experience the world through study away programs – that experience provides them with a unique perspective. In fact, PLU students regularly study on every continent in the world and more than 40 percent study abroad during their time at PLU. The national average is less than 3 percent.

While he was always good with numbers and knew working in business was his professional path, what would most adequately be described as the entrepreneurial spark struck him at PLU.

“You always have to look for opportunity,” Thompsen said. “That’s something I got out of PLU.”

There may be failures, he admitted, but you learn from it and move on.

“You have to tell yourself you can always do it,” he said. “There are no limitations.”