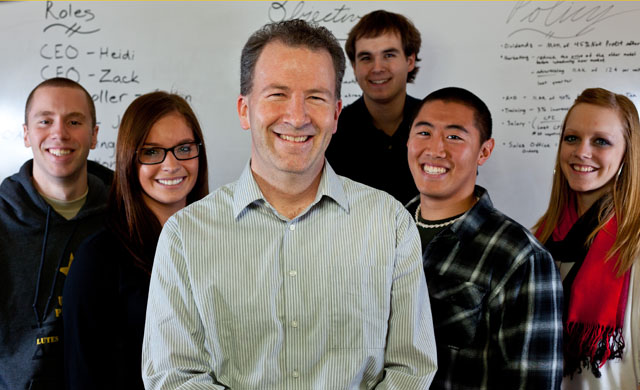 Professor Kory Brown and five of the six students who will be competing in the International Collegiate Business Strategy Competition in Long Beach, Calif., this year.

On Kory Brown’s office wall there is a small rectangular plaque. He earned it 17 years ago for his participation in a business simulation competition when he was an MBA student.

The plaque is a curious memento given Brown’s accomplishments since then: For nearly two decades, he worked in the semiconductor and wireless industries on communication technologies like Bluetooth, USB, IrDA, ZigBee and related smart grid technologies. In 2006, he left industry to earn a Ph.D. in management and strategy.

So, given all those accomplishments, what was it about that plaque?

“I learned more from that competition than I learned from my four-plus years of MBA school,” he said with a smile. (And this comes from a guy who was named his university’s MBA Student of the Year.)

To be sure, Brown’s comment contains some amount of hyperbole. But there is a point to it. As someone who has been deeply involved in so many levels of business – R&D, marketing, strategy development, engineering and executive management — he’s keenly aware of what it takes to succeed.

But as invigorating as the challenges were, Brown decided to exit industry, earn his Ph.D., and look for a university that would enable him to pass along the experience he had gained over the years.

He says that in choosing the university where he would ultimately teach, his thought process was similar to that of a high school student looking for a college. (And considering he has a daughter in college now and a high school senior exploring all options, he has some recent experience.)

Every university, after all, has its positives and negatives. Brown considered his options.

“What kind of students do I want to teach,” he recalls asking himself. “In the end, I wanted to work with high-caliber students.”

Brown chose PLU and has been an assistant professor of business here since 2010.

While here, he has also been able to continue his research, much of it related to his activities in business. Of particular interest to Brown is analyzing how large-scale alliances work – it is something he actively researches and acts as a consultant with industry leaders. As an example, he cites his work with BluetoothTM standards.

That work involves more than 15,000 firms that are members of the Bluetooth Special Interest Group, and about 600 unique individuals who actively contributed knowledge to Bluetooth technology development. Members of these firms actively collaborate to advance Bluetooth technology and then return back to their companies to compete for profits. Brown, in essence, wants to understand these competitive and collaborative dynamics while competitors work together.

And that gets us back to the plaque on his office wall.

The idea of working together for a greater common good also describes the business competition that was so influential for Brown when he was an MBA student. It was, and still is, called the International Collegiate Business Strategy Competition. Teams of students create a simulated company, develop a product concept and business model for that company, and then run that company – top to bottom – for a simulated 20 consecutive quarters. Brown said about every aspect of business is evaluated and measured in the competition.

“These students were amazing and so dedicated to learning, working and winning,” Brown shared as he described the hundreds of hours each student put into the competition.

How well did they do in their first time ever participating in the event? “The challenges, emotions and achievements my students experience in the competition are pretty close to what I experienced in the business world,” he said.