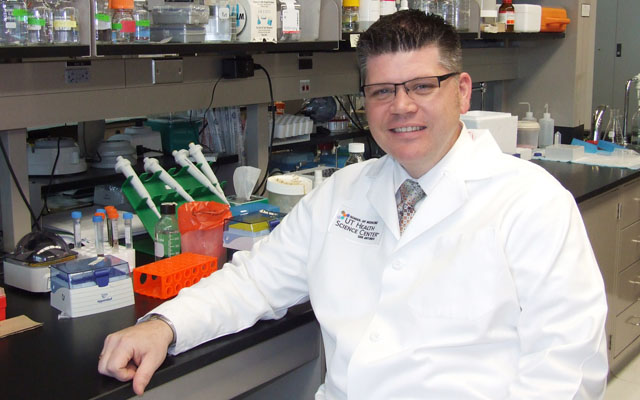 A late-night study session leads to a career studying chemotherapy

During his sophomore year, Greg Aune ’97 was holed up in the library at the University of Washington. He was looking up sources for a research paper – for PLU Chemistry Professor Craig Fryhle –when he thought to check the time. He couldn’t quite believe what he saw: It was midnight, and he’d been in the library reading a book on chemotherapy for six hours.

Aune, who went on to receive degrees in biology and chemistry, and then a masters and M.D. at the University of Texas at San Antonio, decided he’d found his passion: cancer research. He now runs a research laboratory and a clinic at the university, with a focus on how chemotherapy affects children later in their adult lives.

When he considers that he discovered his “true calling” in a library he chuckles. One would have thought he’d discovered his passion for cancer research and pediatric oncology much earlier. At age 16, Aune was diagnosed with Hodgkin’s Lymphoma and went through a yearlong series of treatments. The treatments and recovery delayed Aune’s graduation from Colfax (Wash.) High School by about a year. There was little question that Aune was going to attend PLU, since his father, sister and numerous cousins were Lutes already.

But still, he wanted to check out other colleges before making his choices. But when he visited campus, he knew PLU was for him. “All the professors had this open door policy,” he remembers. “I realized later how rare that was.”

And when he’s in Tacoma, he often looks up Fryhle, and laughs about that long-ago assignment that changed his life.

Return to the Caring at the Core main page >>