Lives of Service: It’s what neighbors do 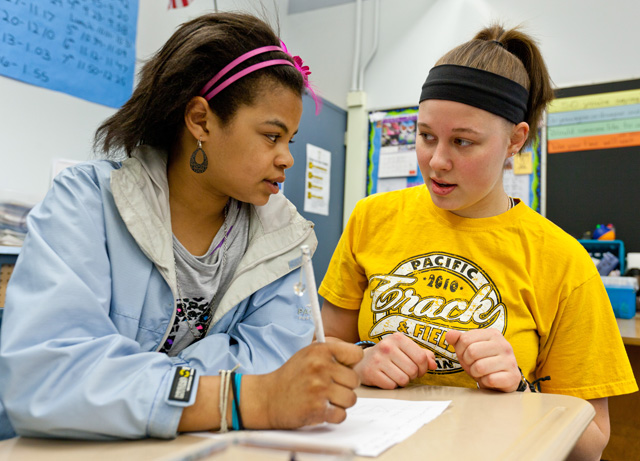 Lives of Service: It’s what neighbors do

In Mrs. Allen’s sixth grade math class at Keithley Middle School, Ms. Castor is rotating from desk to desk helping each student with the challenges of figuring out the area of composite figures.

“Sometimes you have to just break it down to a triangle and a rectangle,” Ms. Castor shows one student, while the two go over the math problem, “and then just show your work by writing it out.”

Figuring out the area of a shape takes steps, Melissa Castor tells the students. Her role in Denise Allen’s class is to assist the students while Allen teaches the material. Castor ‘14 is one of about 25 PLU students who volunteer their time at the Franklin Pierce school that is a neighbor to PLU, as part of Club Keithley.

“My students have benefited so much by having them in my classes to help,” Allen said. “My students truly respond to them and are very open to get their assistance.”Kathryn Bullock ‘12 started Club Keithley her sophomore year. She had a passion for helping children who haven’t always had the easiest path. Bullock hopes to continue that passion when she graduates by working as a social worker with at risk youth. 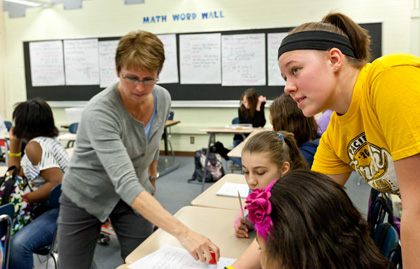 Having PLU students like Castor in her class gives Denis Allen more time to instruct and students an extra person to help them figure out their math problems.

It started with a few PLU students tutoring Keithley students and has grown to dozens tutoring, providing one-on-one mentoring and helping in anyway they can. Many students in Club Keithley spend anywhere from one to three hours a week, but those hours make an impact. One of the most important things to stick with is showing up, Bullock said.”You have to commit to it because those kids don’t need another person showing up for a day or two and leaving them,” she said. 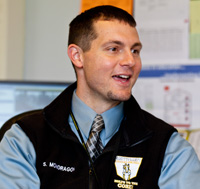 Keithley has a need for the help PLU students can provide, said Steven Mondragon, assistant principal at Keithley. It’s a school of 750 sixth to eighth grade students that has 75 percent of its students on free and reduced lunch and an incredibly diverse population. Many students come from single parent families and it isn’t uncommon to have transient students who enter and leave the school throughout the year.”There’s so much going on in middle schoolers lives,” said Shelby Hasse ’14. “I love getting in the minds of middle schoolers and seeing what’s going on in their lives.”

The middle school has a great staff, Hasse said, but they need all the help they can get in a time of sweeping state and federal budget cuts.”Everyone has heard the cliché, ‘It takes a village to raise a child,’ but it really does,” Mondragon said. “Any help we can get is so appreciated.”It is exciting to see Keithley students connect with PLU students, he said. Students hear and learn from their teachers, but hearing the message of how important education is coming from a young adult is priceless, Mondragon said.”Some students right away get it, others it’s going to take a lot of time and failures to get there,” he said.

Many students from Keithley walk through the PLU campus everyday, Bullock said. In many instances PLU students may not see those middle school students with a positive light, she said.

But by connecting with the school there can be a positive influence on both, Bullock said.

“It can form a better bond between the two,” she said. “Keithley can benefit from PLU, but so can PLU.”

She’s excited to see PLU students play alongside Keithley students in places like the basketball courts by Foss and Pflueger Halls.

“They’re just looking for someone to hangout with,” she said. “It’s been cool to see some PLU students on campus get that.”

Opening up campus to Keithley is an important step in community building, Bullock said.

“It has changed my perception,” Castor said. “That’s the biggest thing I’ve taken away from this and I love it.”

Like so many clubs and activities at PLU, Club Keithley isn’t reserved for students with majors in education – Bullock majored in sociology, Castor in health and fitness promotion, and Hasse in nursing, as a just few examples. 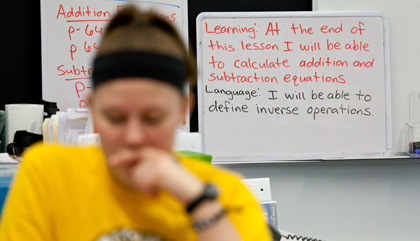 While Castor helps students with finding the area of composite figures, Denise Allen teaches the students about inverse operations.

For these PLU students volunteering is about community building and their seeing what happens when you make an effort and care about being stewards of hope.

“One student started the year telling me ‘I don’t like school, I don’t like anything here,'” Hasse said. “And now she’s telling me how much she likes science.”

“It’s working toward making a community connection,” Castor said. “We’re here for four years – how can I reach out? What’s my impact going to be? We’re really getting out there and starting to live that.”

Club Keithley is about making that positive impact, Hasse said. It is a faith-based club that is always striving to bring the message back to living lives of service.

Tutoring and mentoring middle school students hopefully plants the seeds of possibilities and shows at least a few students the impact they can have on each others’ lives.

The impact these PLU students make everyday starts in math classes like Allen’s, but the spark continues into the community that Keithley and PLU share. Sometimes the strides are small, but the impact is impossible to measure.

While Allen’s class was winding down, a student Castor had been helping came up to her and said “This was easier than I thought.”

Castor smiled and said, “I told you it was easy.”

The student smiled back and returned to grab her book bag and head off to her next class.

“I just love seeing the look on their faces when it finally clicks,” Castor said. “I think that is the coolest thing.”

BE A PART OF CLUB KEITHLEY

To find out how to join or more information about Club Keithley contact either Melissa Castor at castormc@plu.edu  or Shelby Hasse at hassesj@plu.edu.