Hebrew Idol takes it to the next level 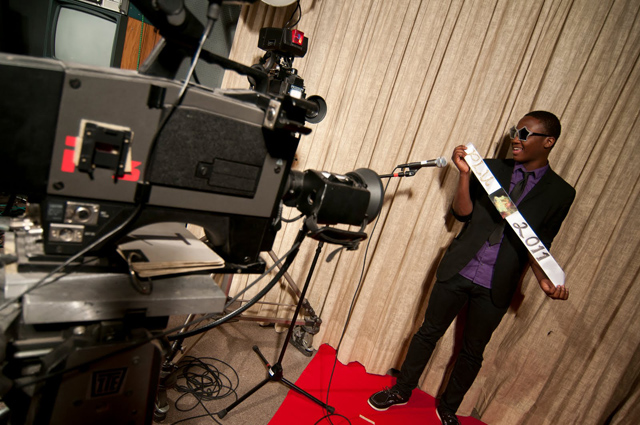 Last year’s Hebrew Idol finale included a Red Carpet entrance and a student MC. This year, the event is moving to a bigger venue – the CK in the UC. (Photo by Theodore Charles ’12)

Hebrew Idol takes it to the next level

PLU students are continuing to raise the bar of creativity and effort for the Annual  Hebrew Idol, said Antonios Finitsis, assistant professor of religion.

“I always think ‘Wow you guys are amazing,’” he said. “They bring it every year.”

The project started five years ago, for Finitsis’ Religion 211 class, Religion and Literature of the Hebrew Bible, and students were charged with the task of reflecting on the contemporary relevance and significance of the biblical material they were studying. Finitsis collaborated with Nick Butler, instructional technologies team manager, to bring the project alive.

Today, it has morphed into a project and competition where students spend a great deal of time developing a story and creating videos that reflect their thoughtful inquiry and imagination.

The finale has become an annual event on campus, growing in size and production every year.

“We’ve done five years of out-staging ourselves,” Finitsis said. “Each year the students get me thinking, ‘How am I going to keep this growing?’”

The project culminates with a finale on-campus at 6 p.m., April 19 in the CK of the UC.

This past year, the project won a NWACC Award for Innovation in Educational Technologies and a Carol Sheffels Quigg Award for Excellence and Innovation for Finitsis and Butler.

The two have worked to foster a project that involves students more every year – even the highly evolving finale where one of the videos is crowned the Hebrew Idol.

“My goal is to put it more into the hands of the students,” Butler said.

In past seasons, Finitsis has at least co-hosted the show, but this year he is handing over the duty and will work more in the background, with Sean Andrascik ’12 and Christney Kpodo ’13 MCing for the finale. Butler has developed graphics, the website and video for the production, but this year is working more in a capacity to oversee students developing animated graphics for the show.

“It has been amazing to see it evolve over the years,” Butler said.

This year is sure to step-it-up, first with a move from Hauge 101 to the CK in the UC.

“Last year, we were kind of bursting out of the room,” Finitsis said.

There will be a Red Carpet, musical performances, honoring of past winners and much more.

“We have a few surprises,” Finitsis said. “We do up the game every year.”

And the celebrity judges are sure to excite with faculty, staff and administrators playing the roles of Bathsheba, The Beloved, Pharaoh, The Burning Bush and the Queen of Sheba.

The finalists for 2012 Hebrew Idol are “Oh, Weakness of Men,” “The Forgiving,” “Judah’s Redemption,” “Anything but Tammy,” “Disclosure,” “The Good Life,” “Joe Nalone and the Muggles Potion,” and “Color Blind: The Things that Unite Us.”

The PLU community can vote on their favorite finalists HERE. Voting ends April 10.