Dr. William Foege received the Medal of Freedom, the nation’s highest civilian honor, at a White House ceremony on Tuesday, where President Barack Obama called him a leader in “one of medicine’s greatest success stories.”

Obama noted – aside from the 6-foot, 7-inch Foege being “pretty tall,” – that the epidemiologist had 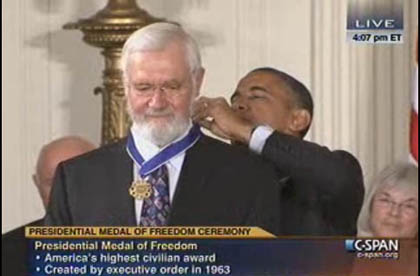 “driven a decades of progress in medicine,” leading the effort to wipe out smallpox and save millions of lives. “In the 1960s,” noted Obama, ” 2 million died each year of smallpox; a decade later, that number had dropped to zero…we all owe Dr. Foege a debt of gratitude.”

Foege received the award along with such notables as singer Bob Dylan, astronaut John Glenn, former Secretary of State Madeleine Albright, and another Washington state resident, Gordon Hirabayashi, a sociologist and Japanese American who fought against the forced relocation of Japanese American citizens during WWII.

Obama noted that no one sets out to win the Medal of Freedom.

“No one picks up a guitar or fights a disease and thinks, ‘In 2012, I’m getting an award from Barack Obama.'” Nor does it take only extraordinary talent or drive, he added. But the award is given for the incredible impact each of the recipients have had on so many people, Obama said.

“And not in short bursts, but in a steady pace over a lifetime,” he said. “Some are household names and others have labored out of the public eye. This is one more accolade for a life well lived.” 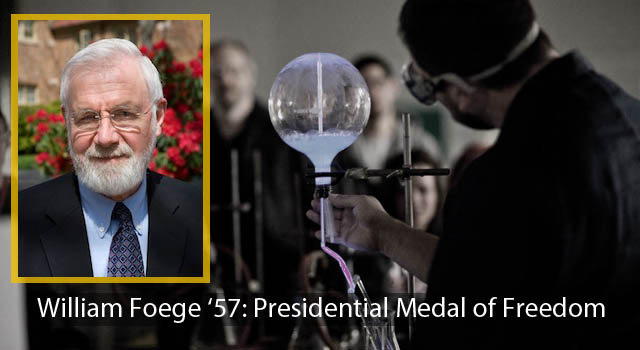 Dr. William Foege, ’57, was named as one of 13 recipients this week of the Presidential Medal of Freedom, the nation’s highest civilian award.

The Medal of Freedom is, according to a White House statement, presented to individuals who have made especially meritorious contributions to the security or national interests of the United States, to world peace, or to cultural or other significant public or private endeavors.  The awards will be presented at the White House in late spring.

“These extraordinary honorees come from different backgrounds and different walks of life,” President Obama said on the White House website. “But each of them has made a lasting contribution to the life of our nation.  They’ve challenged us, they’ve inspired us, and they’ve made the world a better place.  I look forward to recognizing them with this award.”

Other notables who will be honored with the award include astronaut John Glenn, former Secretary of State Madeleine Albright, and another Washington state resident, Gordon Hirabayashi, a sociologist and Japanese American who fought against the forced relocation of Japanese American citizens during WWII.

An Atlanta-based physician and epidemiologist, Foege, 76, helped lead the successful campaign to eradicate smallpox in the 1970s.  He was appointed director of the Centers for Disease Control and Prevention in 1977 and, with colleagues, founded the Task Force for Child Survival in 1984. While at the CDC, he forced drug companies to warn that aspirin may cause the sometimes deadly Reye Syndrome, reacted quickly to alert women to the dangers of toxic shock syndrome and saw the first cases of a frightening new disease in the early 1980s: AIDS. Over his career, he has been, quite simply, recognized as one of the most important figures in public health.

Foege became executive director of The Carter Center in 1986 and continues to serve the organization as a senior fellow. He has served on the PLU board of regents and received an honorary doctorate from PLU in 2000, when he was the university’s commencement speaker.

He helped shape the global health work of the Bill and Melinda Gates Foundation, and remains a champion of a wide array of issues, including child survival and development, injury prevention, and preventative medicine.  Foege’s leadership has contributed significantly to increased awareness and action on global health issues, and his enthusiasm, energy, and effectiveness in these endeavors have inspired a generation of leaders in public health, according to a White House biography of him.

Speaking in 2006 at the dedication of the William H. Foege Building at the University of Washington, former president Jimmy Carter called Foege one of the two men in his life, other than his father, “who have shaped who I am.” Also speaking at the dedication, Bill Gates credited Foege with providing early guidance for development of the global health team at the Bill and Melinda Gates Foundation.

In his 2000 commencement address, Foege urged graduates at that time to become explorers. He urged them to be involved, and not just be spectators in life. “Give quality work throughout your lives,” he said, even though there’s no way of knowing how your efforts will affect the future.

During his lifetime, Foege has championed many issues but child survival and development, injury prevention, population and preventative medicine and vaccines have been his passion over the years, according to an interview Foege did with a Scene editor in 2006. In that interview, Foege expressed exasperation at those who would debate and debate an issue in meetings, rather than going out and doing the work.

“I found myself frequently set up for debate about whether this was possible, “ Foege said of his work to eradicate smallpox by wiping out the disease area, by area. “I remember in the 60s thinking this was a terrible waste of time…to be debating whether this can be done when we should be out doing it.”

Foege and his colleagues employed his containment techniques in India, leading to the declarations that smallpox was gone..the first contagious disease eliminated by deliberate  public health action.

Foege, 76, graduated from PLU with a degree in biology and a minor in chemistry. He went on to get his medical degree from the University of Washington and his masters of  public health from Harvard University.  The son of a Lutheran minister, Foege said in the 2006 interview he wasn’t sure what he wanted to do when he arrived at PLU, except to follow in the footsteps of his hero, Albert Schweitzer, the German philosopher, doctor and humanitarian who did groundbreaking health work in Africa.

During that 2006 interview, the lanky, 6-foot, 7-inch Foege, credited much of his success with the help of others, and his time at PLU.

“It’s such a nice place to get an education,” he said. “People who go there do not appreciate how good it really is. “I went to the UW, Harvard, and it took me awhile to realize some of the best teachers I had were at PLU.”

Material from former Scene editor Katherine Hedland ’88 was included in this report.