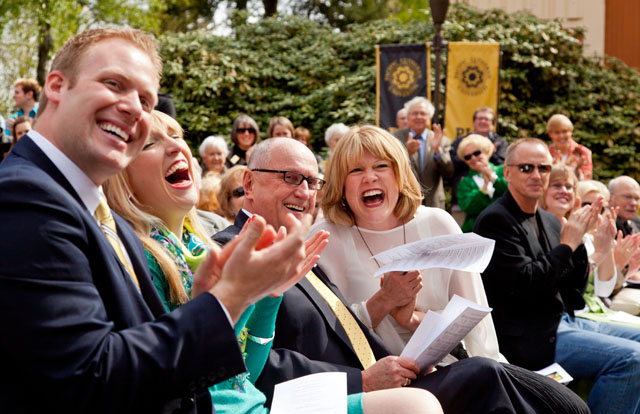 Loren and MaryAnn Anderson (far right) react to the unveiling of a bronze bust of President Anderson in front of the University Center, which was rededicated to the Andersons and their 20 years of service to PLU. In the foreground are Maren (Anderson) Johnson ’09, and her husband, Elliott Johnson ’07. (Photos by John Froschauer)

The Pacific Lutheran University community gathered together on Friday to celebrate 20 years of dedication and service by Loren and MaryAnn Anderson, and spring a big reveal on President Anderson.

After Bruce Bjerke ’72 praised the Andersons for their long service to PLU – noting that during their tenure PLU has seen the creation of five endowed chairs and professorships, an endowment of $75 million and the recent completion of a capital campaign topping $120 million – he had a surprise in store.

Bjerke, chair of the Board of Regents, turned to Assistant Professor Spencer Ebbinga, who unveiled a bronze bust of Anderson.

PLU’s president looked surprised for a minute and then began to laugh.

Not missing a beat, Bjerke noted that that was a high compliment from the self-effacing North Dakota native. The bust will have a new home in the newly renamed Loren and MaryAnn Anderson University Center.

Anderson said that he usually “cultivates the art of not finding myself speechless, and in the last 19 years and 9 months, this is the first time,” as he gazed at an image of himself.  Anderson reflected on what he had been feeling as his time at PLU draws to a close. His last official day will be May 31. On June 1, the new president, Thomas Krise, from the University of the Pacific, will take over the helm of PLU.

In sorting through his feelings, Anderson said he drew on a phrase that Bubba Watson used when he won the Masters Golf Tournament this year.

“He said that, ‘My wildest hopes and dreams never went this far,'” Anderson said. He noted that leading PLU from 1992 through this year “has been winning the masters for me” and that he leaves with a “profound sense of gratitude and humility.” He also praised the campus community members for the work they do each day to make PLU a great place.

“There is no greater calling in God’s kingdom than building for the future, and that’s what happens here every day,” he said.