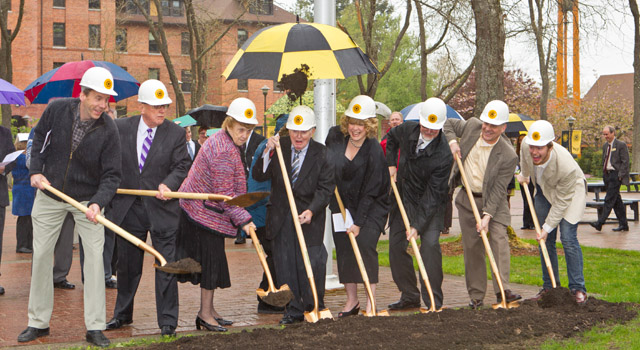 On May 5, groundbreaking for phase II of the Karen Hille Phillips Center for the Performing Arts took place.

“This is a long awaited and much anticipated event,” President Loren J. Anderson told the assembled crowd.

The 60 year-old Eastvold had been identified as a building in dire need of revitalizing as far back as 1995, he said. It took a series of steps to get to this occasion. First was a fundraising effort ran purely by volunteers that raised $10 million.

“It was, I think, by any stretch the most successful volunteer fundraising in the university’s history,” Anderson said.

The next was a generous gift left to the university by Karen Hille Phillips ’55, PLU’s single largest benefactor. Her lifetime giving and bequest to PLU totaled $25 million. A $2 million gift from Kaare and Sigrunn Ness, Arne Ness ’69, Shane Ness ’99 and Cindy Ness, will fund the Ness Family Chapel renovations, which will include a new entrance to the chapel and an elevator to all floors.

Last summer, the Studio Theater was competed as part of phase I. Along with the Ness Family Chapel renovations, phase II will include a renovation of the Eastvold Auditorium. Construction should be complete in 2013.

It will be a place of learning, a new home for amazing theater, a religious center and a treasure for the whole south sound community, Anderson said.

This has been a dream in-the-making for a long time, said Bruce Bjerke ’72, chair of the Board of Regents.

“It just took all of these stories coming together to make this possible,” he said.