The book you need to read this summer 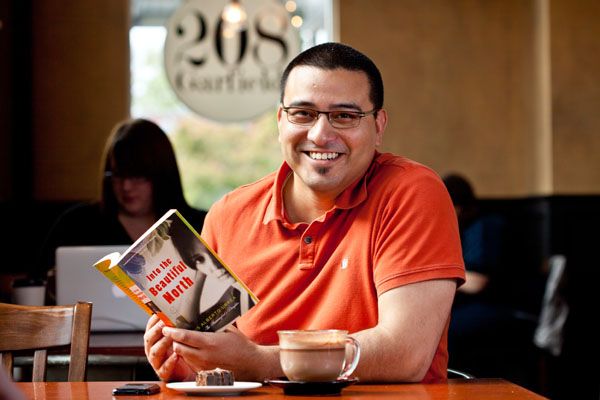 Editor’s note: Luis Alberto Urrea, author of “Into the Beautiful North” will speak on campus at 7:30 p.m. Thursday, Sept. 13 in Lagerquist Concert Hall.

The book you need to read this summer

When first-year students showed-up to campus this June for the class registration sessions called Charting Your Course, they left with more than course catalogs and paperwork associated with their newly registered classes.

They also left with the novel “Into the Beautiful North,” by Luis Alberto Urrea, and a series of study questions associated with the book.

Not really. But every incoming student is being asked to read the novel as part of an innovative new program at PLU.

In the eyes of Starre Helm ’12, an English major who helped select the book, the arrival of this novel is an easy, and interesting, way for students to become acclimated to the intellectual rigor associated with classes at PLU.

Helm was part of a small pilot reading program during orientation when she was a first-year student. She loved it. She also remembers what happened to her when she was in her first class a few days later.

“The prof asked the first question about something we read, and I remember thinking to myself, ‘Oh my gosh! I would have never thought of that!’ I freaked-out a little bit – this was not like high school,” she said.

“But I could start feeling my brain shift gears, thanks in part to the book discussions we did during orientation,” Helm continued. “I relaxed, and soon the class wasn’t nearly as scary and intimidating.”

That is exactly the point, said Amber Baillon, associate director of student involvement and leadership, and co-director of the Common Reading Program. She sees the program as a great – and fun – way for students to encounter college expectations, even before school starts.

“I kind of think of it as a sneak-peek of what you’ll get out of your college education,” Baillon said.

“We want every student to start at PLU with at least one shared experience,” said Matthew Levy, assistant professor of English and Common Reading Program co-director. “And it is important to us that it is an intellectual experience involving communication, community and critical thinking – the themes of our First-Year Experience Program.”

It won’t just be first-year students taking part in the program. PLU faculty members, staff and returning students are also encouraged to pick up the book. The goal is to have as many people as possible read the novel by September orientation, ensuring that nearly everyone has at least one shared experience with the incoming class of 2016.

During orientation, faculty and staff will be taking part in a panel discussion of the book, as well as leading small-group discussions with other PLU students. Additionally, the author himself, Luis Alberto Urrea, will be coming to campus on Sept. 13 to discuss his novel.

According to Baillon, these events – including the author reading – are about having a common starting point where everyone (faculty included!) can begin to talk about their lives, their own identity, and the many different lenses through which we perceive life.

“Students who make connections with faculty and staff outside of normal class time and who make intellectual interests part of their social life with peers are usually going to be more successful,” said Levy.

Some professors are also integrating the book into their curriculum. Lisa Marcus, associate professor of English, plans to teach the book in her Writing 101 seminar on “Banned Books.” She wants students to recognize that Urrea’s book has been banned in Arizona as part of a push to suppress ethnic studies, particularly works that address Mexican-American history and experience.

Students in her course – after reading about several controversial banning cases around race and sexual orientation – will take up Urrea’s book in the context of the Tucson School Board’s decision to remove his works and many others, including Shakespeare’s “The Tempest,” from the high school curriculum for fear that they would provoke ethnic pride and separatism.

She stresses that beyond the story and relatability of the characters, it is important to think about the book in terms of current discourse and legislation about immigration and Americanization, discourse that can be ugly, ideological and censorious. While such topics may be weighty for first-year students, she believes that bringing these topics to the classroom in a student’s first semester in college is crucial to fostering critical thinking, an important goal of the First-Year Experience Program.

For Helm, as she looks back on the pilot project in which she participated, she knows it was absolutely the right way to start her college education. She’s glad others – an entire cohort of students – can now do the same.

“Was there a better way to start college?” Helm asks. She doesn’t think so. “I knew from the moment I got my book, PLU was invested in my education.”

To view a conversation between Bill Moyers and Urrea that aired on PBS, click here.