The value of the bourgeoisie 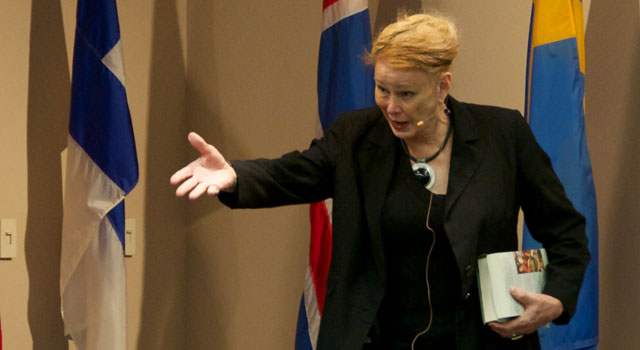 Deirdre N. McCloskey – distinguished professor of economics, history, English, and communication at the University of Illinois at Chicago – spoke about the value of the middle-class during the annual Dale E. Benson Lecture in Business and Economic History. (Photo by John Struzenberg ’15)

The value of the bourgeoisie

Don’t be ashamed of being bourgeois, said Deirdre N. McCloskey, distinguished professor of economics, history, English, and communication at the University of Illinois at Chicago.

“We must acknowledge our middle-class bourgeois character and embrace it and perfect it. Greed is not good. We should take our roles as innovators — the market judges of innovators — and court it the respect it’s due,” McCloskey said.

McCloskey presented a lecture entitled, “Bourgeois Virtue? Why being Middle-Class is Good for us,” on Monday, October 15, at the 8th Annual Dale E. Benson Lecture in Business and Economic History.

The annual lecture series was established by the Benson Family Foundation during the 2005-2006 academic year and brings to campus outstanding members of the academic and business community. The topic for the Monday night’s lecture came from McCloskey’s series of books, The Bourgeois Era, which explore the relationship between moral virtue and capitalism. She argued that innovation, ingenuity, and the drive of societal change are characteristics of the middle-class, and that it was from the liberation of this class that the modern world emerged.

Bourgeois was coined as a term of resentment for the middle-class, because “being a business person was not to be honorable,” said McCloskey. “In an aristocratic society, …the only honor to achieve is by being a saint or a solider. The only honor is to be a priest or the servant of an aristocrat. You play your role in the court or the battlefield, and that’s honesty.”

The bourgeoisie brought a change in ideas about callings to one’s occupation though. They started producing services and products that society could benefit from.

“Entrepreneurship is where it’s at,” McCloskey said. “Ordinary economics… is based on accumulation, to which I say, ‘no.’ It’s not piling brick on brick. It’s innovation. It’s ingenuity that made us rich, not just getting more bricks. If you have a completely stagnant population, then you’re doomed to a non-progressive society.”

McCloskey argued for capitalism, but not the capitalism she’s seen promoted in the last 30 to 40 years.

“This system of market-tested innovations is not the worst for human character. Commercial deal is not the worst life for a human-being. It forms character if it’s honest capitalism, if it’s virtuous, if it’s not just maximizing the bottom line,” McCloskey said. “What an active participant in an active bourgeois society is trying to do after all is make a product or service that other people benefit from.”

Economics and Political Science double major Bernice Monkah ’13 was among those in attendance. Monkah was surprised by McCloskey’s views on capitalism — that it was positive when you look back in history.

“She is a very famous name, and it’s great to have her here,” Krise said.