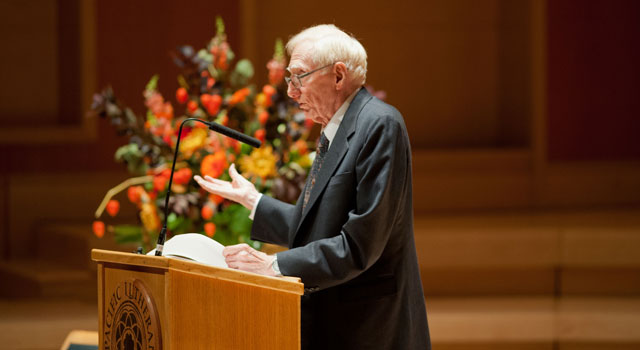 Robert N. Bellah, the Elliott Professor of Sociology Emeritus at the University of California at Berkeley, was the lecturer for the annual David and Marilyn Knutson Lecture, Oct. 24. (Photo by John Struzenberg ’15)

How do we as a species adapt to a rate of change that no biological species before has ever faced? This was the question Robert N. Bellah, one of the foremost sociologists of religion in the world, posed to students, staff, faculty, and community members Wednesday evening.

“Most scientists in the world today believe we’ve crossed the line of sustainability,” said Bellah. “The world of science and capitalism has removed the thermostat on global warming. It’s as if you have a furnace in your home that you can’t turn off, or that you need the cooperation of the world to turn off.”

Bellah, who serves as the Elliott Professor of Sociology Emeritus at the University of California at Berkeley and has authored many influential books on the sociology of religion and religion in American life, presented a lecture entitled, “The Modern Project in the Light of Human Evolution,” on Wednesday, Oct. 24, constituting the seventh annual David and Marilyn Knutson Lecture.

The lectureship brings to campus nationally recognized scholars who creatively work within the historical, scriptural, and theological sources of a living faith tradition, bringing those sources into dialogue with contemporary questions and challenges. Bellah’s topic was that of his next book, the namesake of the lecture, in which he explores the advancement of modern society in relation to the rises and falls of past societies.

Those societies have experienced a hard ceiling, said Bellah, produced by “the paradox of development – the very success of pre-modern societies leads to overpopulation, famine, plague and war.”

“Twice before 1800 the index of development reached 43: during the Roman Empire in the first century CE and during the Southern Song Dynasty around 1000 CE. In the last 18th century, both the West and China had reached 43 again, but seemed headed for another hard ceiling when something new under the sun happened,” Bellah said.

The new advancement was the invention of the steam engine in 1773, which set off the industrial revolution and was probably only possible due to the scientific revolution, said Bellah.

“Development not only blew through the hard ceiling of 43 by the end of the 18th century, but by 2000 it was reaching 1,000 – an advance totally unheard of in pre-modern times,” said Bellah. “In the last 50 years, the information revolution increased at a rate that makes the industrial revolution look slow, with consequences we can hardly imagine.”

The qualitative picture of modernity compared to other societies has dramatized the uniqueness of the modern condition for Bellah, and he encouraged his audience to consider if and when modern society will hit its hard ceiling.

“It’s not useful to terrify people with this notion – that leads to anxiety and cynicism and not working to change it,” Bellah said. “We can work to change it. We need to think about what kind of world we really want.”

Many of those in attendance were familiar with Bellah’s work from past classes, including history and religion double major Julia Walsh ’14.

“I’ve read a number of his books,” said Walsh. “I will take away the connection between the idea of sacredness of the human individual and the modern era – I hadn’t connected the two. I had the information, but he drew the narrative I could follow. It is something I will continue to think about.”

“I can’t wait for your book to come out,” Kakar told Bellah in a Q&A after the lecture. “You never leave any rock unturned in your research. I’m anxiously waiting for the next book.”