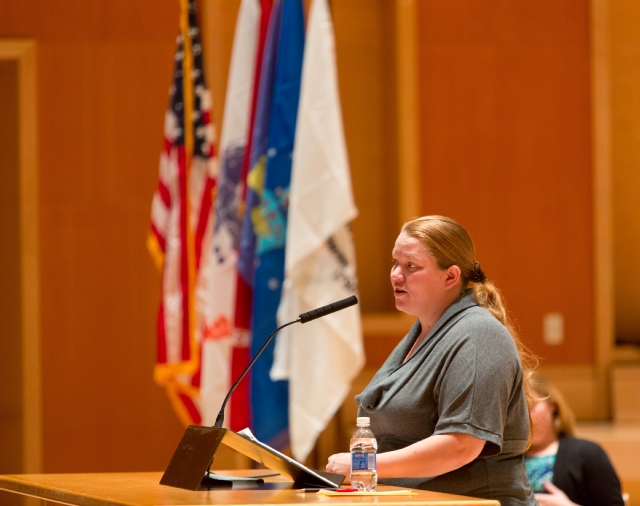 Leannna Davis, President of the Student Veterans Association, and who served in the US Air Force, talks about the importance of duty and integrity. (Photo by PLU Photographer, John Froschauer).

Honoring those who serve and protect

Leanna Davis doesn’t see anything extraordinary about signing up in the U.S. Air Force and volunteering for three tours of Afghanistan after 9-11. It was part of her duty, and her honor to serve her country, she told the assembled crowd on Monday, as PLU honored its veterans at a special ceremony in chapel.

“When my family and friends asked me why I would do this this,” said Davis, president of the Student Veterans Association and in PLU ROTC, ” I simply told them I had a job to do. And even though I was leaving two small children at home, I would hope they would be proud of me.”

As the keynote speaker, Davis also talked on the values of all military branches of the service, and striving for “excellence in all that we do,” a specific core value of the U.S. Air Force. The core values of all branches of the service are integrity, honor and duty. The military, she said, brings all races, political persuasions, and demographics together to strive for a single goal of protecting our country.

The Master of Ceremonies during the event was SFC (Ret) Robert Rahal, US Army, PLU ROTC. President Thomas W. Krise was away from campus on business, but televised his thoughts to those assembled and talked about the close relationships between PLU, ROTC, the Armed Services and Joint Base Lewis McChord. Krise also gave a special call out to Lt. Brian Bradshaw ’07, who was killed in Afghanistan in 2009. Bradshaw’s parents have started an endowed scholarship at PLU for ROTC students and veterans.

In all, Krise said, some 200 students at PLU have an affiliation with some branch of the Armed Forces. Krise himself is a veteran, having received a B.S. in history from the U.S. Air Force Academy, he went on to serve 22 years in the U.S. Air Force, retiring with the rank of Lieutenant Colonel.

The ceremony was sponsored by the Associated Staff Council, PLU ROTC and the Diversity Center.