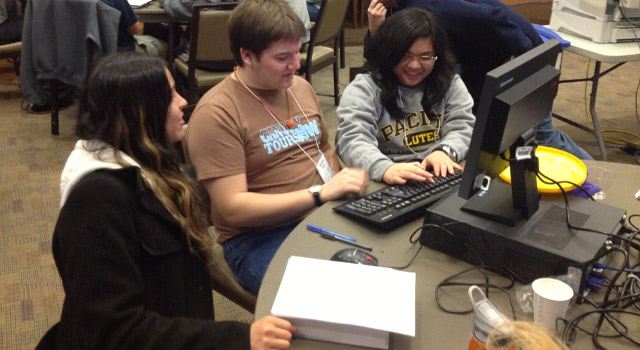 First time competitor, Ben Landes ’14, described the Association for Computing Machinery International Collegiate Programming Contest as “sports for nerds.”  They were divided into three teams, PLU-3, PLU-2 and PLU-1, and took fifth, 11th, and 16th respectively at the University of Portland. Within the entire region, PLU-3 took 42nd, PLU-2 took 66th and PLU-1 took 82nd out of 111 teams.

“I’m so proud of the job they did,” Kenneth Blaha, professor of CSCE

The contest is held over five hours across six different campuses in British Columbia, Oregon, Hawaii, California, and Washington. Unlike sports, these competitors don’t need to be in the same room or even the same country to compete with one another. During the five hours, competitors must solve as many problems as possible, as quickly as possible. Winners are decided by which team solved the most problems. In a tie, whichever team solved the problems the quickest wins.

“You would think that five hours would be more than enough time,” said Nick DeVoll ’15, who competed last year. “But in reality, we only solved two last year.”

With a group of mostly new students and only one returning member, Blaha said before the competition that he “would be happy if they finished in middle of the pack.”

That is exactly what happened. Each team solved three problems this year, which is as many as the winning team at the University of Portland. Last year, the best PLU team only solved two.

“They are convinced that they were within minutes of solving a fourth problem,” Blaha said, which would have clinched first place for any of the PLU teams at their site.

Last year competitors were given a scenario in which mines had a variable blast radius. They had to calculate the blast radius needed to kill all of the zombies in the scenario. To prepare for the competition, the students had spent the last several weeks solving problems like this.

“Some problems are super easy while others are pretty hard,” Landes said.

Blaha predicts there will be eight returning students next year and said he hopes to get into the 25th percentile.

“They are convinced that next year they can get first place at their local site in Portland,” Blaha said. “I think they have a good shot.”

PLU’s top group took 42nd place and that’s “not that far away,” Blaha said. The three teams had prepared since the third week of the semester by solving practice problems. The team overall hasn’t taken many of the upper division courses that would have helped them in this contest.

“This is kind of a trial year [for me],” Landes said. “Next year I can contribute a lot more.”

Despite the lack of upper division courses, DeVoll said, “the team is really capable this year. They were solving problems that have left me scratching my head.”

This isn’t the only limitation though. PLU has to compete against large schools like Stanford, University of Washington and University of British Columbia. This is similar to a division three team competing against a division one team. These large universities send up to seven teams and typically have a graduate student on each team, Blaha said. The other schools also tend to have more creative names. The winning team at University of Portland was ICan’tBelieveIt’sNotBabbage! and the runner ups were the Cybermetic Dinosaurs.

The PLU students discussed an idea for a name for next year on the drive back from Portland.

Their idea was LUt=e, which is a play on the decomposition function LUx=b. Blaha said advanced programmers would understand the joke.

Not only are they talking about names for next year, but are discussing how to do better. This includes working over the summer to prepare for next year’s competition. They would like to attend qualifying tournaments over the summer that are designed for the larger schools to pick which teams they send to the ACM International Collegiate Programming Contest.