Inspired by the history of the West, Russell Rowland ’81 has made a career exploring Western identity.

Partnered with long-time friend, Lynn Stegner, Rowland produced a new anthology that delves into the evolution of the Western identity.

“It was an issue that I was really excited to explore,” Rowland said. “I was really surprised how many well known writers were willing to contribute.”

Rowland received a bachelor of arts in music education from PLU, and went on earn a masters in creative writing at Boston University, where his life took a new direction.

While he was studying at Boston University, Rowland wrote his first novel, In Open Spaces, a historical fiction piece about his home state of Montana. He published the novel 11 years later, in 2002, and then a second novel, The Watershed Years, in 2007. 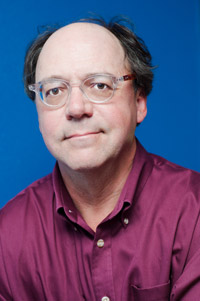 “I became interested in the history of the West,” Rowland said. “It inspired me to put together the anthology.”The West is the area of the United States that includes every state west of Mississippi. The anthology, titled West of 98: Living and Writing the New American West, explores how Western writers perceive Western identity changing.

It “tries to consider what it means to be a Westerner now, as we are moving forward into the 21st century,” said Lynn Stegner, co-editor of West of 98. “It is also a book about how landscape imprints individuals.”

What began as a much smaller collection of 12 essays on Western identity over the past 200 years, grew into a compilation of 66 poems and essays commenting on the changes in the West since expansion in the 18th century.

“It quickly mutated to be a defining core of voices that could talk in a way that could really define what it meant to be a Westerner,” Stegner  said.

Rowland has received various acknowledgments for his work, including making the San Francisco Chronicle bestseller list for his first novel.

As a member of Choir of the West at PLU, Rowland was given the opportunity to travel and see new areas of the United States that he was never able to experience before.

“I got to see a lot of America that I hadn’t seen before,” Rowland said. “It was nice to get introduced to the fact that there is a lot to offer in the United States.”

Since graduating from PLU, Rowland lived in 12 different states across the country. Most recently, he lived in California for about 14 years, until moving back to his home state of Montana, where he teaches Creative Writing at Montana State University in Billings.