This year, Pacific Lutheran University ranks No.18 on Peace Corps’ 2013 Top Colleges for small schools. The annual list recognizes the highest volunteer-producing colleges and universities for small, medium, large and graduate institutions. There are currently 15 undergraduate alumni from PLU serving overseas. Last year PLU produced only 9 volunteers, and by doubling their number this year they have joined the top 25 volunteer-producing schools in the nation. Since 1961, PLU has produced 242 volunteers in the Peace Corps. 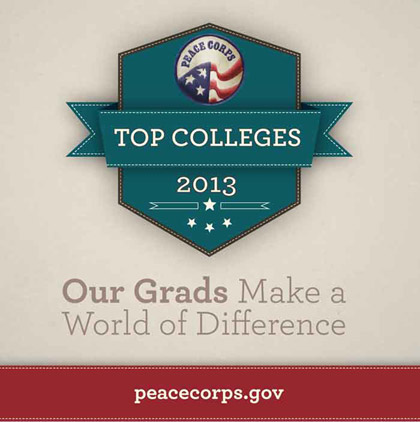 “Every year, graduates of colleges and universities across the United States are making a difference in communities overseas through Peace Corps service,” said Peace Corps Acting Director Carrie Hessler-Radelet. “As a result of the top-notch education they receive, these graduates are well prepared for the challenge of international service. They become leaders in their host communities and carry the spirit of service and leadership back with them when they return home.”

“Peace Corps announces Top Colleges annually to recognize the schools that contribute the most alumni making a difference overseas through volunteer service,” said Peace Corps West Coast Regional Manager Janet Allen. “We thank and congratulate PLU as one of the 23 universities from the West Coast producing globally-minded leaders who turn idealism into action as Peace Corps Volunteers.”

During Peace Corps service, college graduates make a difference in communities overseas. Volunteers return home as global citizens with cross-cultural, leadership, language, teaching and community development skills that position them for advanced education and professional opportunities in today’s global job market. Ninety percent of volunteer positions require a bachelor’s degree. Americans with backgrounds in agriculture, environment, teaching English as a second language, and other technical or language skills related to Peace Corps assignment areas are encouraged to apply for service one year in advance of their target departure date. The next application deadline is February 28, 2013.

About the Peace Corps: Since President John F. Kennedy established the Peace Corps by executive order on March 1, 1961, more than 210,000 Americans have served in 139 host countries. Today, 8,073 volunteers are working with local communities in 76 host countries in agriculture, community economic development, education, environment, health and youth in development. Peace Corps volunteers must be U.S. citizens and at least 18 years of age. Peace Corps service is a 27-month commitment and the agency’s mission is to promote world peace and friendship and a better understanding between Americans and people of other countries. Visit www.peacecorps.gov for more information.