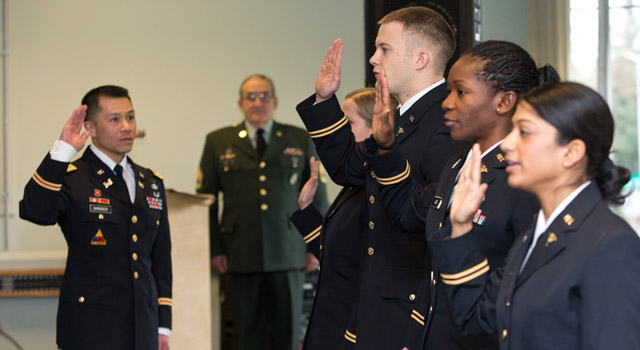 PLU’s ROTC program is the recipient of the prestigious MacArthur Award. (Photo by John Froschauer)

The awards, presented by the U.S. Army Cadet Command and the Gen. Douglas MacArthur Foundation, recognize the ideals of, “duty, honor and country” as advocated by MacArthur.

The award recognizes the eight schools, selected from among the 273 senior ROTC units nationwide, as the top programs in the country. PLU ROTC also received the award for the 2009-2010 academic year.

“It’s truly an honor to be amongst a university, a corps of cadets and a team of cadre pursing excellence with such passion,” said Lt. Col. Jason Shrader, and professor of military science at PLU. “It’s a testimony to the hard work and dedication to not only want to succeed as individuals but this award highlights the care and commitment to see others succeed because it’s a unit award distinguishing the program above many other quality ones in the nation. Receiving it twice in the past three years shows the legacy of excellence is established and not just a coincidence.”

The Pacific Lutheran program represents Cadet Command’s Eighth Brigade, which consists of  the 30 senior Army ROTC programs on the west coast as well as in Alaska, Hawaii and Guam.

The award is based on a combination of the achievement of the school’s commissioning mission and its cadets’ performance and standing on the Command’s national Order of Merit List and its cadet retention rate.

Cadet Command and the MacArthur Foundation have given the awards annually since 1989.