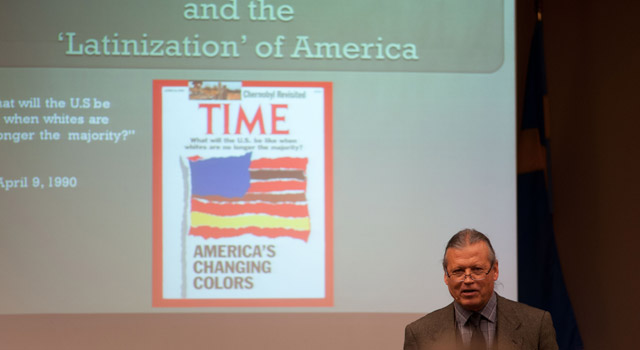 For the Walter C. Schnackenberg Memorial Lecture, Neil Foley was in fine form speaking with wit and sober candor on “The Hispanic Challenge and the Latinization of America,” before a crowd Feb. 25 in the Anderson University Center.

Foley, the speaker for the event, is the Robert H. and Nancy Dedman Chair in American History at Southern Methodist University in Dallas. The Schnackenberg Memorial Lecture is named in honor of the former PLU history professor. The lectureship aims to  bring to campus distinguished members of the world academic community to discuss significant topics of historical interest.

Foley’s lecture examined the incoming population of Hispanic immigrants and what has been called, “the browning of America,” detailing the dueling views surrounding the influx of new immigrants. His intention was not to offer a solution, but rather expand the public understanding of its complexity.

In 2012, more than 50 percent of American births were minorities, in an obvious irony, rendering the term less apt. Of course, that figure was comprised of no single minority, but it still highlighted a trend that is irrefutable, no matter where one stands on the issue. Foley, in large part, intended to prove this.

He filled in a background for immigration, expanding on the thought behind the foundational immigration bills of 1924 and 1965, the latter of which was formed due to the abject racism of the former. His key point, being that the “immigration” problem, has existed for some time, but adapts only in who it targets. Explaining assimilative nature of the U.S., he said, “We’re like the Borg,” referencing a creature from Star Trek. “We swallow up everybody.”

Today, it is our southern border that causes the tremors of fear that pervade the United State’s populace, he said. Using a series of maps, Foley illustrated the spread of Mexican Americans, from 1990 to 2006, when the census was taken across the country. At this point, he seemed to have the crowd convinced, this was an undeniable occurrence. With that, Foley said the data illuminates a truth that this Mexican immigration is a trend, not some preventable event.

He concluded with this idea: Obama won the most recent election in a landslide caused by his views on immigration, and the Hispanic percentages of the American population. The Republican Party has realized this, and bipartisan committees are trying to draft up new immigration legislation. There is no longer any use in thinking about this country as anything but a diversely racial nation. This was his intent, ending with a question, “What will it mean to be white, when whiteness is no longer the norm?”