February 26, 2013
Editor’s note: Speakers from the Nobel Peace Prize forum will be livestreamed at three events March 8,9 and 10 on-campus at PLU. 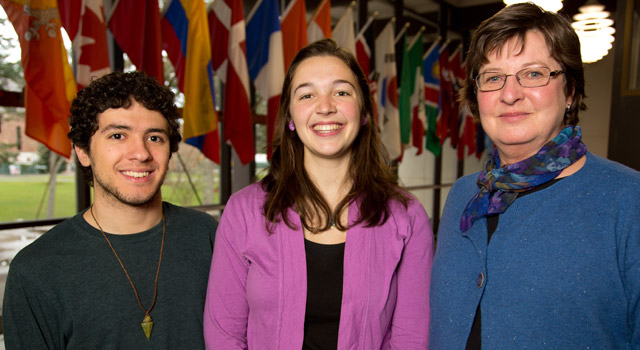 Bruno Correa ’15 and Anna McCracken ’14 will represent PLU as Peace Scholars, accompanied by Claudia Berguson, the Svare-Toven Professor of Norwegian and Scandinavian Studies at PLU, at the Nobel Peace Prize Forum March 8-10 in Minnesota. (Photo by John Froschauer)

Next week, two Pacific Lutheran University students will be flying off to Minneapolis to begin fulfilling their dreams of someday working in the Peace Corps, the State Department or an NGO overseas.

Anna McCracken ’14 and Bruno Correa ’15 will be representing PLU as the Peace Scholars for 2013 at the Nobel Peace Prize Forum. While attending the three-day forum, held each year in Minnesota for the last 25 years, the two will be listening to Nobel Peace Prize winners, such as Muhammad Yunis, father of the micro-lending movement and Tawakkol Karman, a Yemeni journalist known as “Mother of the Revolution.”  Journalist Robin Wright, who spoke at PLU last week, will also be at the conference, as will lawmakers and scholars at the cutting edge of peace building.“I like the fact they bring in speakers from business and science as well,” said Claudia Berguson, associate professor of Norwegian and Scandinavian Area Studies, who will accompany the students. Berguson is also the Svare-Toven Professor of Norwegian and Scandinavian Studies at PLU.

McCracken, a global studies and anthropology major, said that after she graduates, she hopes to do volunteer work with the Lutheran Volunteer Corps, and work with countries or communities in conflict “to build a common community and move forward.”

McCracken said she found her passion when she spent time in Northern Ireland, last J-term, and last fall in South Africa.

“After those experiences, I decided, ‘yes!’ this is what I want to do,” she said.

Correa, from Uruguay, is also a global studies and anthropology major, he said he wants to work for an NGO or perhaps join the Peace Corps after graduation.

Becoming one of the universities associated with the conference was one of President Thomas W. Krise’s priorities when he arrived at PLU last year. A five-college consortium – Augsburg, Augustana, Concordia (Moorehead), Luther and St. Olaf – established the conference in 1988.

The forum is the only affiliation of the Nobel Institute in Oslo with colleges and universities in the U.S. Scholars from the colleges began attending the conference in 2011, and last year, PLU sent one scholar as a test case – Colin Mischel ’12, who majored in Norwegian and Scandinavian Studies, with a minor in peace and conflict dialogue.

This year, 10 students formally applied and wrote essays to compete for one of two slots at the conference, she said.

Three speakers at the Nobel Peace Prize Forum will be live-streamed at PLU on March 8,9 and 10. Discussion by faculty will follow.

March 8: The first lecture will be by Nobel Laureate Muhammad Yunus, the father of the micro-credit movement, and it will be streamed live at 10:30 a.m. Friday, March 8  in room 133 of the Anderson University Center. Faculty-led discussion will be led by professors Priscilla St. Clair (economics), and Mark Mulder and Fern Zabriskie (business).

March 9: On Saturday, a talk by Dr. Paul Farmer, one of the world’s leading thinkers on health and human rights, will be live streamed at 1:30 p.m. in the Scandinavian Cultural Center. Faculty-led discussion will be led by professors Matt Smith (biology) and Gina Hames (history).

March 10: Finally on Sunday, Nobel Laureate Tawakkol Karman, a Yemeni journalist will talk about safety and the rights of women and children in Yemen. She will be live streamed at 1:30 p.m. in room 133 of the Anderson University Center. She is the first Arab woman and second Muslim woman to win the Nobel Prize. Faculty-led discussion will be led by Professor Giovanna Urdangarain (Hispanic Studies). Discussion will also be led by the student organization Network for Peacebuilding and Conflict Management.
After attending the conference, both McCracken and Correa will attend the Peace Scholars program in Oslo for seven weeks during the summer. The students will be spending time at the Nansen Center for Peace and Dialogue in Lillehammer, where they will be participating in dialogue sessions with students from the Balkans and the Middle East. The remainder of the program takes place at the University of Oslo’s International Summer School.