So What’s Next After Normal? 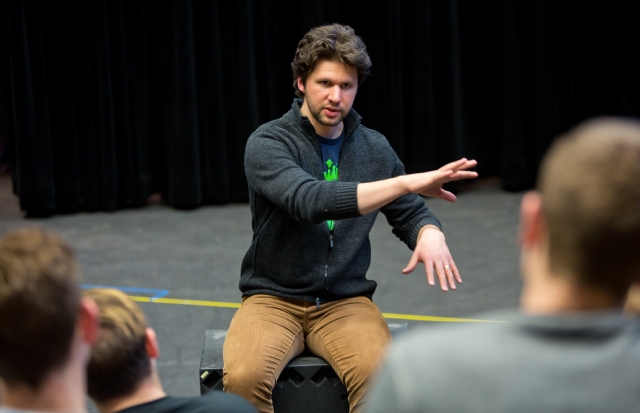 Louis Hobson ’00 talks with theater and voice students at a workshop in January. (Photo by John Froschauer)

What’s Next After Normal?

So now what? After going to the Big Apple and making it big – as in a key part on a Broadway, Tony-winning, Pulitzer Prize winning play big – what’s next?

Louis Hobson ’00 gets asked that question a lot these days. And his answer seems to be, everything. Just last month, Hobson acknowledged he will be artistic director of Seattle’s Balagan Theatre in the Capitol Hill neighborhood. Hobson will also star in the Balagan’s first show of the season: Les Miserables,
http://www.youtube.com/watch?v=tcmxjmnKK-w

which will begin its run in September. Hobson also hopes to use his New York City ties to bring some off-Broadway productions to the Seattle theater.

“Here we go, fingers crossed,” he said in a recent interview at the Studio Theater on the PLU campus before a workshop.

Hobson moved back to the Northwest last fall, and lives in Tacoma with Noreen Hobson ‘99, and his three children Gwen, 5; Thomas, 3; and Charlie, 1 year. Life has seemingly come full circle for the performing arts major, who after appearing in a number of plays after graduating from Pacific Lutheran University in 2000, decided in 2008 that it was time to take the plunge and see if he could make it in New York City.

So with no prospects and only the promise of a blow up mattress on a friend’s living room in Queens, Hobson left his wife behind and took the risk. And that made all the difference for the Puyallup native.

Within a few weeks, he’d landed a role in Next to Normal, a Broadway play that later won the Pulitzer Prize that year for theater. Hobson has been working steadily since, with parts in musicals such as “Leap of Faith,” “Bonnie and Clyde” and he co-starred in “Sweeney Todd,” at Oregon’s Portland Center Stage. Aside from working in the theater scene here, Hobson also has some irons in Hollywood, including appearing in a movie in which Johnny Depp will make a cameo.

He took all this experience and recently boiled it down to bits of advice as workshops he held in January at Pacific Lutheran University. His main points: Follow your passion and take risks.

On the first point of following his passion, Hobson told the class that during his sophomore year at PLU, his father nearly died of an aneurysm, and Hobson, who was a music education major, decided that he was done with playing it safe. His real passion was the theater. So he switched and hasn’t looked back since.

“Life is too short to do something you don’t love,” he said.

On taking risks, Hobson stressed that is was better to fail spectacularly, rather than simply turn in mediocre work.

“It’s better to attempt to be brilliant and fail, than just accept being mediocre,” he said.